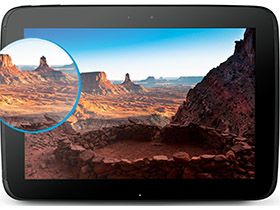 Can Google's Nexus 10 Beat Apple At Its Own Game?

We've had a lot of fun watching tablets evolve, starting as toys and slowly turning into devices we could actually imagine ditching our notebooks for. Interestingly, when there was only one real player in the space, Apple, we knew exactly what to do on our iPads. We'd tote them around with us as complements to the rest of our digital armada of smartphones and laptops. The tablet could keep the kids busy. It was better for Web browsing than a phone thanks to its big screen. And, for the same reason, it was great for watching video.

As the space started crowding with Android-, QNX-, webOS-, Windows RT-, and finally, Windows 8-based competition, the purpose of a tablet really started getting a lot more difficult to pin down. Today, the spectrum runs from glorified e-book reader to bona fide notebook replacement. We love having a ton of devices to choose from, without a doubt. But now more than ever, it's important to pick the right device for what you want to do, else you find yourself frustrated.

Nexus 10: Back To Basics

It was only recently that Apple deviated from its original trajectory with the iPad Mini (Apple iPad Mini Review: Our New Favorite Size, But...That Price?), shrinking its form factor in an apparent shot at Google's Nexus 7. Before that, it was making steady improvements to the iPad. The third-gen iteration introduced a 9.7" IPS screen with a resolution of 2048x1536, which works out to 264 pixels per inch. The company called its high-pixel-density display Retina.

Google's Nexus 10 returns fire with a larger 10" screen boasting an even higher 2560x1600 resolution (that's right, the same resolution we use to test high-end graphics cards on 30" panels). Its resulting pixel density (300 pixels per inch) is even higher than that of the third- and fourth-gen iPads.

Truly, the Nexus 10 is out to get Apple's incumbent tablet. It doesn't try to be the svelte little handheld at an incredible price that the Nexus 7 was. It doesn't try to be the productivity-oriented notebook alternative that the Surface attempts to pull off. Rather, the Nexus 10 gets us right back to where we started: an iPad competitor that evolves the content consumption concept by incorporating the latest internals with more screen space.

But Google doesn't just arm the Nexus 10 with better hardware. It also goes for the iPad's biggest vulnerability: its price. It costs $400 to get your foot in the door with a 16 GB Nexus 10. Meanwhile, Apple wants $500 for the same amount of memory.

If you're happy with the dimensions of a third-gen iPad, you'd be happy with the Nexus 10. Its larger screen naturally translates to more width (it's almost an inch wider, in fact), but it's also narrower and thinner, if only by a touch. Moreover, the Nexus 10 is lighter, and that's a more palpable attribute, we think.

The Nexus 10 is well-built. The plastic case features a rubberized coating that resists fingerprints, and the material is thick enough that it doesn't give when you press on it. Many folks are going to prefer Apple's more industrial feel, but we've had plenty of issues with scratched-up enclosures, so that's not necessarily a universal winner, either.

We like the all-black scheme Google goes with, giving the Nexus 10 a business presence the Nexus 7 doesn't have.

There are very few physical connectors along the Nexus 10's edges. With that said, the ones Google chooses to expose are both valuable and standardized, which we certainly appreciate.

The top of the tablet hosts a volume rocker and power button. On the bottom, you'll find what Google calls its Magnetic Pogo pin charger. Although we don't have any accessories in-house that plug into it, rumor has it that a charger is coming with the ability to get the Nexus 10 back up to 100% battery capacity quicker than the micro-USB connector.

The left side of the Nexus 10 gives you the aforementioned micro-USB interface, along with a 3.5 mm headphone jack. The right side plays host to a Type D micro-HDMI connector. Unfortunately, Android still limits you to display mirroring. So, while we appreciate the ability to output to another screen, the utility of such an output is limited by the Nexus' operating environment. We're still hoping to see Google incorporate display extension support, similar to what Windows RT enables.

Current page: Can Google's Nexus 10 Beat Apple At Its Own Game?

Next Page Results: CPU Performance
104 Comments Comment from the forums