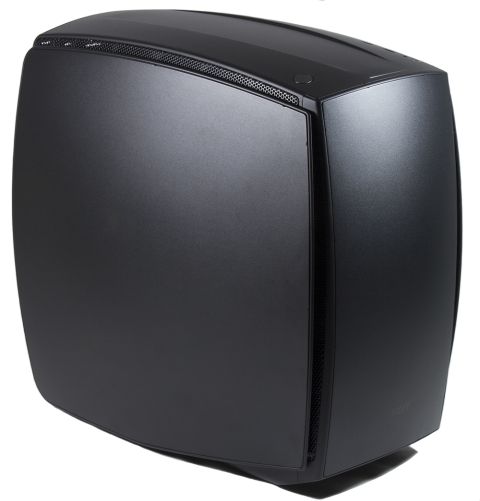 Although the Manta is large for a Mini ITX case, it should still be well received by those wanting to go small while still packing all out performance. Even though it may not be today's value winner, its sweeping curves and valued added features earn it our approval for anyone who's willing to fork over $140 for a Mini ITX case.

With its new case, the Manta, NZXT is taking advantage of a new manufacturing process to do away with old, flat looks, instead producing a case with sleek, curved body panels. The new process allows NZXT to produce the curved panels out of steel instead of plastic, which leads to a much heavier and higher quality case. As with the previously reviewed Define Nano S, the Manta is on the large-end for a Mini ITX case coming in at a massive 16.77-inches in height, 9.65-inches in width and 17.71-inches in depth and a whopping 15.9 pounds.

The case is meant for builders who want to go small but just can't make performance sacrifices for smaller parts. With room for two 280mm radiators, CPU coolers up to 160mm tall and GPUs/PSUs up to 363mm long, the Manta has more than enough room and cooling potential for anything you could ever reasonably expect to fit in a Mini ITX case and then some.

The Manta also follows the lead of some of NZXT's other new cases with a seven-channel fan controller, and LED lit PSU shroud and rear I/O panel. However, all of those fancy add-ons don't come cheap, making it one of the more expensive Mini ITX cases we've tested.

The front panel connectors on the Manta are positioned on the right side of the top panel, towards the front. The curve of the top panel helps to give the connectors a slight tilt to the right, making them easier to reach if the case is sitting to your left. As with many other MiniITX cases, the Manta provides you with two USB 3.0 ports and a pair of audio jacks. The power button sits opposite of the connectors on the left side of the case and the power/HDD activity strip is centered at the front of the case.

Unlike many of the cases we've reviewed, the Manta comes with a front dust filter that's actually easy to remove and doesn't require the use of tools or the removal of either of the side panels. With a gentle pull, the curved front panel simply pops off the case and then the dust filter unclips from the front for easy cleaning. The front of the case supports up to two 140mm fans or a 280mm radiator and even has enough room to support a push/pull fan configuration.

The bottom-rear of the case includes a removable dust filter, which pulls out of the back for easy cleaning. Also featured is a shrouded power supply bay with an LED lit logo and room for an ATX power supply up to 363mm in length.

The Manta comes with plenty of build space in the main compartment, with room for a single GPU up to 363mm in length. There's also room to mount up to two 2.5" SSDs/HDDs to the right of the motherboard. For individuals who like to build their own water cooling loops, the raised bar with NZXT's logo to the right of the motherboard tray features two attachment points for a reservoir/pump combo. Finally, in addition to the two front fans there's also a 140mm fan at the rear of the case as well as room for two 140mm fans at the top of the case.

The right side of the case includes mounting points for two 3.5" drives or one 3.5" drive and one 2.5" drive. There's also a sizeable cutout in the motherboard tray for easier access to the back of the board for mounting CPU coolers.

Like the Noctis 450 that we recently reviewed, the Manta comes with a seven-channel (30W max) fan controller as well as a controller for the built-in lighting system. The fan controller makes use of the motherboard's CPU fan header to control the speed of the CPU fan and up to seven other fans in the case. Meanwhile, a small button on the back of the case near the I/O ports controls the lighting system. The first press turns on the rear light above the I/O panel; pressing it again turns that light off and activates the light on the PSU shroud; pressing it a third time activates both lights, and a final press turns them all off.

The installation kit for the Manta came with several packs of screws, extra motherboard stand off, cable ties and a logo sticker. Oddly enough the sample I received was missing the manual for the case (the small booklet above isn’t a manual), though I was able to find it on NZXT's website.

The header cables for the Manta include USB 3.0, HD-Audio, Power/LED and HDD LED. Not pictured is the fan controller cable that plugs into the CPU fan header on the motherboard, and the CPU fan extension cable, which is simply a pass through from the controller.

Building inside the Manta is a breeze, all of the major components simply slide into place and are then secured to the case with screws. With all of the panels removed, there's plenty of room to route and connect cables. Once everything is in place the exterior panels slide and snap back on for a smooth, clean look.

If you want a quieter build with a minimalist, yet still eye-catching look, the windowless version of the Manta fits the bill pretty well. For those who prefer to show off their builds, NZXT also sells a version of the Manta with a generously sized window. Finally, if all black isn't your thing NZXT also offers the Manta in black with a red trim and white with a black trim.