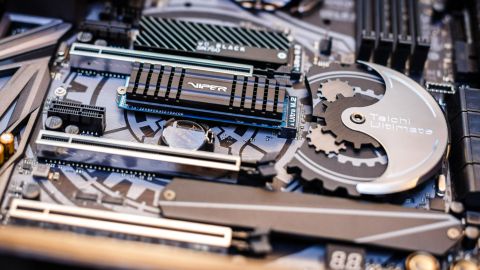 Our comparison products represent many of the most popular options on the market. For starters, we pit the Viper VPN100 against the all-mighty Samsung 970 Pro and EVO Plus, as well as WD’s newly revised Black SN750. We also threw in the SMI 2262EN-powered HP SSD EX950 and Adata XPG SX8200 Pro. The lineup wouldn’t be complete without MyDigitalSSD’s BPX Pro with updated 12.1 firmware and Intel’s SSD 660p.

Samsung’s 970 Pro took the win as the fastest flash-based product on our charts, followed by the Silicon Motion-powered SX8200 Pro and EX950. Patriot’s Viper VPN100 came in behind the 970 EVO Plus, taking sixth place overall.

The Viper's game load times weren’t at the top of our charts. To the contrary, it ranked last in our comparison pool of flash SSDs and was even beat by Intel’s QLC 660p. But, at 22 seconds vs. 20 seconds, the total load time wasn’t far off from some of the best. That’s not to mention it was over 30% faster than an archaic HDD.

Moving files around on the Viper VPN100 went quickly. While you would think that the extra over-provisioning from the BPX Pro would give it the lead over the Viper VPN100, we can see that wasn't the case without the burdens of a heavy enterprise-class workload. With an average of 292MB/s, it essentially tied the BPX Pro and was significantly faster than a SATA SSD or HDD. The Viper ranked eighth overall during the 50GB copy test, and second in read performance.

The Viper installed SYSmark in 14 minutes and 51 seconds, the same as Intel’s Optane 905P, which was quite impressive.

The Viper VPN100 delivered impressive results, but it just wasn’t as impressive as some other drives. Following a similar performance result as the BPX Pro, the Viper's read and write performance hit the rated target speeds of 3.45/3.00 GB/s of read/write throughput in ATTO. But it took a hit along the way. At the 128KB file size, write performance dropped before it improved to its rated specification.

Sequential performance came in at 3.47/3.05 GB/s read/write at a queue depth (QD) of 32. Scaling our workload down to a more realistic QD1 revealed performance wasn’t quite as good, but competitive nonetheless. At QD1 the Patriot Viper VPN100 delivered ~2.1/2 GB/s of sequential read/write throughput.

At QD1 the Viper delivered over 13,000/43,000 read/write IOPS, but this wasn’t as impressive as some of its competition. Pushing harder to a QD of 64 unlocked 380,000/~500,000 random read/write IOPS. The BPX Pro's overprovisioning seemed to give it a slight advantage in both reads and writes, but overall, the Viper VPN100 is far more capable than any SATA SSD.

Like all Phison E12-powered SSDs, the Viper VPN100 has an SLC cache that absorbs inbound writes. While the Viper is rated for up to 3 GB/s of write throughput, we found that it is limited to a cache capacity of about 24GB (the same as the BPX Pro). Once the cache is full, the controller pushes any remaining inbound data directly to the die, causing performance to drop to roughly ~1075 MB/s until the drive is completely full.

At idle the Viper consumed a little under half a watt with ASPM disabled and sipped just 48mW with the feature enabled. The drive maxed out at 5W during our 50GB copy test and averaged 2.66W. Putting that together with our transfer speed data, we see that the Viper VPN100 is fairly efficient–more so than the Samsung 970 series and BPX Pro.

Prev Page Time to Get Tactical Next Page Conclusion