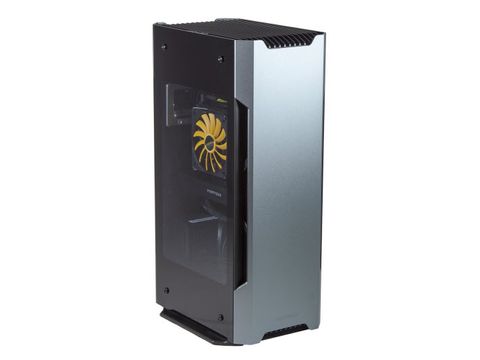 It seems to be a common theme now for case manufacturers to ship compact cases with only a single fan installed. This isn’t usually a problem since most users install their own fans, either by adding liquid coolers or standalone case fans. However, because we test cases as they’re delivered to us, just having a single fan can limit airflow, which leads to head buildup inside the case and, in turn, poor thermal results. The lack of additional fans makes the Evolv Shift the hottest case on the chart—so hot in fact that one of the CPU cores had to throttle back during the test to stay under the temperature limit.

Usually cases that use tempered glass in their construction perform quieter, since the glass helps to reflect the sound back into the case. Oddly enough this doesn’t seem to hold true for the Evolv Shift, making it the second loudest case in today’s comparisons.

As expected the Evolv Shift’s poor thermal and noise performance cause it to take a big hit in our efficiency comparison.

The Evolv Shift’s modest $110 price tag offers it a bit of redemption in our performance-per-dollar value chart, putting it in third place. However, for those on a budget or looking for true compact case with superior performance, the Evolv Shift is still a far cry from some of the other options in our comparison set.

The Evolv Shift’s disappointing stock performance makes it easy to forget that you’re getting a case that’s covered in aluminum and tempered glass for only $110. Still, another fan would have probably gone a long way towards fixing some of the thermal issues we found earlier, without significantly adding to the overall cost of the case. Those with high performance hardware and who have the space available may want to take a look at the larger Evolv Shift X as the better option.

In any case, the Evolv Shift gains our seal of approval for anyone looking for an aesthetically pleasing, well-built case for a reasonable price.