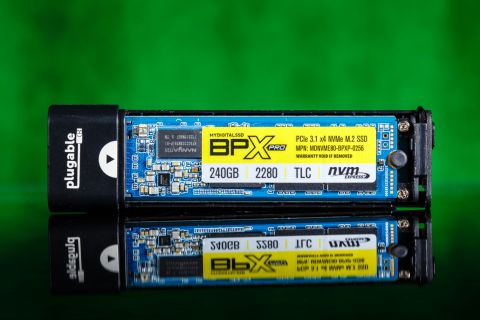 Recently we took a look at the MyDigitalSSD M2X, a pretty cool USB Type-C SSD enclosure that houses M.2 NVMe SSDs. Like the M2X, the Plugable USBC-NVME enclosure offers portability for just about any NVMe SSD, but it features a tool-free design.

The Plugable USBC-NVMe delivered performance right in line with its specs. The drive proved to be plenty speedy during file transfers, easily surpassing any SATA-based external, but it still lagged the faster, and more expensive Thunderbolt 3 devices.

We also conducted some extra file transfers to and from the Plugable enclosure using the M2X adapter. Both enclosures sustained single-video file transfer speeds of 700-720MB/s and peaked at 850MB/s when transferring 2-3 folders simultaneously via independent drag-and-drops.

The adapters were both warm to the touch after the test, but not what we would consider excessive after transferring 300 GB of data. Both enclosures hovered in the ~50C range, though the Plugable USBC-NVME enclosure was 5 to 6C hotter under load. It was also 3C hotter at idle (41C vs. 44C).

We ran into problems when we connected the drive to an older Z170 motherboard with a Thunderbolt 3 AIC from ASRock (Intel JHL6540 chipset). Unfortunately, there was some delay during device detection. Additionally, the external enclosure would disconnect during some transfers. The M2X adapter suffers from this same issue. We've followed up with both vendors for more information.

Overall, this device is convenient for re-purposing older NVMe SSDs. The enclosure enables the full throughput of the USB interface while keeping the installed drives cool, even under heavy workloads. That, along with the friendly price point, makes the Plugable USBC-NVME a good option if you're searching for an economical and speedy DIY enclosure.