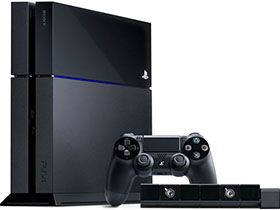 As enthusiasts, we have to like that Sony shies away from proprietary storage technologies in its gaming consoles. Instead, the company sticks with standard hard drives, making upgrades quick and easy. Back in the day, its PS2 accommodated 3.5-inch PATA devices, which sound downright ancient now. The PS3 was compatible with 2.5-inch SATA-based storage. Today, the PlayStation 4 includes an easy-to-replace 2.5" disk as well, keeping the tradition going.

From the factory, you get a 500 GB (465 GB formatted) drive that allocates about 57 GB for the operating system and other software. Now that digital downloads and local installations are necessary, though, we anticipate the remaining 408 GB will start disappearing quickly once more content becomes available. Does that make you want to drop in something bigger, even if you're still stuck with a mechanical disk?

On the other hand, an SSD would be cool to try too. You don't necessarily have to take a big capacity hit, either. A 500 GB Samsung 840 EVO runs $325 or so, and if it made a big experiential difference, surely there would be plenty of enthusiasts swapping solid-state repositories into their consoles, just to try them out.

Alright, fair enough. Few of us want to double the console's price by throwing in a massive SSD. So realistically, you're looking at a choice between speed or space. We're going to compare those two extremes using a handful of 2.5" drives, hopefully determining the right balance for you.

As with any hard drive swap, adding an empty disk into a platform means reinstalling your operating system. Before you begin that process, though, you may want to back up your saved games or make sure they're synced to PSN Plus. Your favorite titles naturally need to be reinstalled as well, and you can do that from discs or PSN. Sony doesn’t limit the number of times you can grab a game from its network, fortunately.

Make sure you have a USB-based flash drive, to which you'll copy the operating system install file. Sony provides this for download; simply grab it and make sure it's in the directory PS4/Update/. Also, take note of the operating system version you're running, since Sony won't let you revert to a previous build.

The console maker posts two software update packages, including a full install that weighs in around 880 MB and a smaller update in the 315 MB range. You want the bigger file for a complete installation.

The physical drive swap is easy. All you need is a small Phillips screwdriver. Sony hides the PlayStation's hard drive under the glossy black accent cover, which slides off with minimal effort. Once you remove it, there's one screw that secures the drive cage. Kudos to Sony for adding the square, circle, triangle, and rectangle controller pattern on the screw.

Four screws lock the factory 2.5-inch drive into place, and they're decoupled from the chassis with rubber grommets. A height limit of 9.5 mm prevents the installation of larger 2 TB repositories. However, there are plenty of large mechanical disks and super-fast SSDs 9.5 mm-tall or less.

With the drive installed, plug in the flash drive and power the platform on. Either hold the power button for seven seconds to access the fail-safe menu, or the the system will automatically boot into safe mode, guiding you to install the operating system from your external storage device.

Next Page Four 2.5" Drives, Tested
61 Comments Comment from the forums
Be In the Know