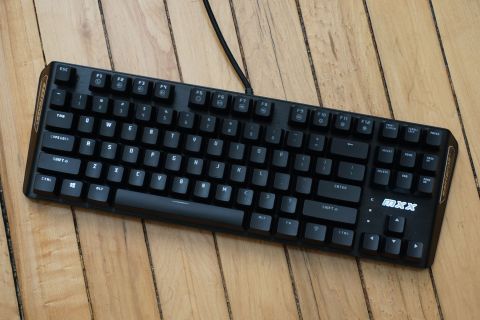 As we noted above, this keyboard has 21 screws holding the aluminum plate in place. There's no flex or play in the case at all, even when you’re typing aggressively. The sound from heavy typing when the keys "bottom out" does carry well thanks to the floating key design, though.

Our review unit has Cherry MX Brown switches, which have a light tactile bump. The bump is almost imperceptible if you're a heavy typist, but that's true of all Cherry Brown boards. We noticed a hint of scratchiness when we pressed these switches slowly, but you won't notice that during normal use.

Most of the stabilizers on this board seem smooth and quiet, but the spacebar and Enter key are both louder than they should be. After inspecting these stabilizers up close, there's nothing obviously particularly wrong with them. The housing and insert simply don't fit together as well as they should.

The Rantopad MXX is a somewhat barebones keyboard. There are no macro keys, no RGB LEDs, and no number pad—not that everyone wants those. The standard tenkeyless form factor takes up less space on your desk, and the standard layout makes it easy to find third-party keycap sets.

The hardware is excellent for the price, except for some slightly rattly stabilizers. You get your choice of switches, both Gateron and Cherry. The build is lightweight, but it’s still plenty sturdy thanks to all those screws holding the aluminum plate tight. The plate itself is only 1.5mm thick, but there's no flex; it's held tight against the plastic frame, so the two pieces combine to ensure better rigidity. We also appreciate the removable USB cable and included cloth sleeve, both of which make it convenient for hauling around.

The keycaps aren't amazing, but they're similar to what you get on other mainstream keyboards, so if you’re comparison shopping with the likes of Razer or Corsair, just know that there’s parity between their respective keycaps. We wish Rantopad had paid more attention to which characters were illuminated by the LEDs, though. Many keys have secondary functions lit instead of the main function because of the location of the LED. The LEDs are just plain white—the Rantopad MXX doesn't have RGB.