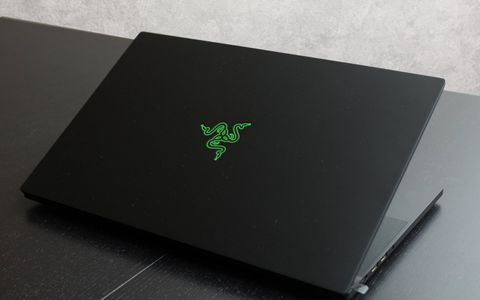 Our lowest end laptop is another representative from Acer, the Predator Helios 300. It’s equipped with an i7-7700HQ, a GTX 1060, 16GB of DDR4-2400 memory and a 256GB M.2 SSD. We often use the Helios 300 in our comparisons because of its excellent value-to-performance ratio.

Compubench has a platform-based Video Processing test and a GPU-bound Bitcoin Mining test.
In GPU-focused tests, the Blade loses its advantage. In particular, Acer Predator Triton 700 outscores it by about 34 percent.

We perform an IOmeter test on each laptop’s primary drive to measure basic random and sequential read and write speeds. The laptops contain the following storage solutions:

The Blade’s Samsung PM981 offers respectable 4K random and 128K sequential speeds. You can be sure that it will run small application-based tasks or launch large files with ease. However, it’s quickly overshadowed by the other options in this roundup. For one, the 960 EVO has slightly faster read and write speeds, while the Triton 700’s RAID configuration offers nearly double the read speed.

We use PCMark 8’s Microsoft Office and Adobe creative tests to simulate a common workday workload. These tasks are platform-based, so systems with powerful CPUs and fast storage solutions perform best. Seeing as how the Blade and Equinox have the same processor and similar storage speeds, it comes as no surprise that their Adobe Creative and Microsoft Office scores fall within the same ballpark.