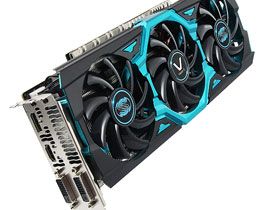 A Double Helping Of Ram

Better late than never, though. Today Sapphire introduces its Vapor-X R9 290X 8GB card, a factory overclocked model with twice the amount of RAM found on the reference 290X that was released just over one year ago. A lot has changed in that year, but most importantly Nvidia has launched the similarly-performing $330 GeForce GTX 970, pushing the Radeon R9 290X's original $550 MSRP down to the same range. From a marketing perspective the timing is right for Sapphire to release a 290X with twice the video memory, at a time when the Radeon R9 290X can use an edge against the tough Nvidia competitor.

Having said that, savvy PC enthusiasts know that more RAM doesn't equal more performance in the vast majority of situations. It does allow gamers to select high-resolution texture sets without a penalty, though, and it can make a noticeable difference in some game titles at very high resolutions such as 2560x1440 and beyond. In an age where 4K monitors are becoming more common, 8GB of graphics memory has never been more apropos.

Sapphire's Vapor-X comes with a 1030 MHz core clock (30 MHz higher than the reference spec), but the memory runs at an impressive 1375 MHz, 125 MHz more than the standard 1250 MHz clock. As we mentioned, the Vapor-X carries 8 GB of the stuff, of course. Sapphire claims to have developed a new VRM engine with digital power control and a 10-phase power delivery system, which you can see on the back of the card. The two thin slits between each bank of five VRMs illuminate during operation, too.

The aluminum fins pull heat away from the cooling block and vapor chamber via two 8mm and two 6mm copper pipes. Three 90mm fans are present, but when the temperature is low only the center fan will spin, reducing its noise footprint. We're not sure why, but users have the option to force all three fans on all the time via a switch on the side of the card.

Two 8-pin power inputs indicate an available 300 Watts of power in addition to what's provided by the PCIe slot. This is beefier than the reference model's 6-plus-8-pin configuration, and should provide extra oomph for overclockers. The card's BIOS allows for an impressive 50% increase in the power target, by the way. The extra RAM will probably draw noticeably more power than the reference model, which is something we'll look at in our tests.

Sapphire includes an illuminated Dual BIOS switch that allows the user to select either legacy or UEFI compatibility modes, which also allows a ROM flash without the worry of bricking the card. You won't see any CrossFire bridges here, since the Radeon R9 290 series doesn't require them.

The Sapphire logo on the top of the card illuminates blue when the card is cool, and changes from yellow to red as the temperature increases under load. It's not especially useful, but it's a fun bling feature.

The Vapor-X R9 290X is equipped with a DisplayPort, a full sized HDMI, and two dual-link DVI-D outputs. Triple monitor Eyefinity setups do not require active adapters as they used to on Radeon cards.

That's a good look at the hardware. Now let's see what it can do.