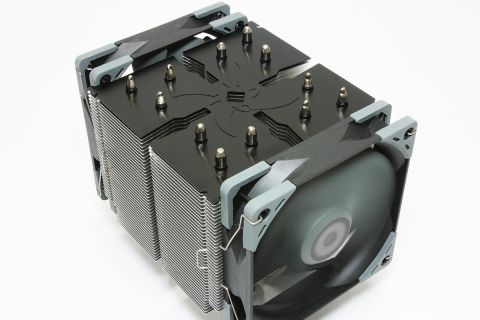 Using our hex-core Intel i7-5930k clocked to 4.2 GHz  at 1.2 volts, we can compare the Ninja 5 against other coolers which have graced our test bench.  This means that large, heatpipe-based air towers are the focus of our attention and, by including testing results of the FSP Windale 6, be quiet! Dark Rock Pro 4 and the Cooler Master MasterAir MA620P TUF Edition, we can build an effective comparison between these coolers evaluation of the big Scythe cooler, the Ninja 5.

Outright thermal load performance of the Ninja 5 lags a bit behind the other products in our testing quartet but that does not tell the entire story as we’ll see in a moment.  Strong numbers from the be quiet! Dark Rock Pro 4 and the FSP Windale 6 look promising while benchmark tallies between the Scythe Ninja 5 and Cooler Master MA620P TUF battle head to head, just to keep up.

CPU coolers depend on overall surface area as a primary cooling commodity to allow for their fans to dissipate thermal loads away from the cooling fins and into the surrounding area.  Interestingly enough, the Ninja 5 relies on lower-speed 120 mm fans than its competitors, which might detract from overall cooling potential to compensate for low noise levels.  Rated at 800 rpm, the dual cooling fans on the Ninja 5 were found to outperform their rated speeds, peaking at just over 900 rpm in our tests.

Even with the lowest fan speeds of the testing group, the Ninja 5 still cannot manage to turn in the lowest noise levels, although anyone would be hard-pressed to notice a PC in a room with any of these large coolers installed.  In fact, other ventilation case fans and traditional platter hard drives will likely draw more attention than any cooler in this list.

With decibel levels being relatively equal for registered noise and decent thermal load ratings, the Scythe Ninja 5 manages to hold its own against the performance of the FSP Windale 6 and the be quiet! Dark Rock Pro 4, while the Cooler Master MasterAir MA620P TUF Edition takes an efficiency hit due to volume differences.

Combining unit cost with overall cooler performance, the Scythe Ninja 5 begins to center itself in the middle of the pack due to relatively moderate pricing at $60 (£47) to match that of the Cooler Master MA620 TUF while only the FSP Windale 6 is priced lower.  The Dark Rock Pro 4 easily reaches into the upper echelon of bleeding-edge enthusiast performance, while also demanding a price tag that matches these expectations.

Thermal imaging from our FLIR ONE Pro shows only a slight difference between full and half-speed fan settings, but you can see that the cooling fins retain more thermal energy at 50 percent of the maximum rpm.  Nearby components, including the ambient air and chassis roof also have elevated readings.

With all things considered, the Scythe Ninja 5 represents a decent air cooling option for most moderately-overclocked CPUs, but it does struggle with high-end desktop processors and big overclocks.  Strangely enough, the same can be said about the Cooler Master MasterAir MA620P TUF as both units perform and are priced nearly the same.

Unfortunately, the 800 rpm fans limit the Ninja 5's cooling potential. If having a quiet system is a higher priority, then the the Scythe Ninja 5 is a solid choice. However, if you need top-notch cooling, you should go for a product with better airflow like the be quiet! Dark Rock Pro 4, which is actually even quieter.