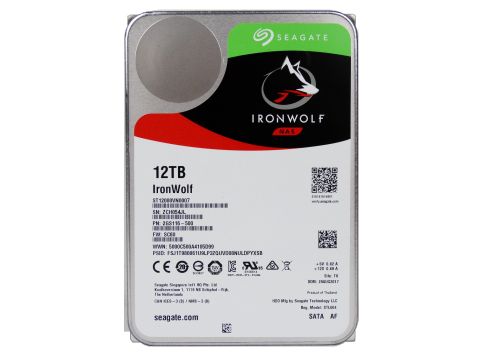 We use a Thecus N8880U-10G rackmount for our NAS testing. It features an Intel Core i3-2120 dual-core processor running at 3.3GHz. This system allows us to test with up to eight drives in RAID 0, 1, 5, 6, 10, 50, 60, or JBOD. The Thecus system ships with a 10GbE network adapter from the factory and delivers consistent performance.  We used a Gigabit connection, but we plan to use 10GbE in the future as we optimize our test environment.

The next hop is through an enterprise switch that is the core of our offline environment. We issue the workloads from a dual socket server with Intel 10-Gigabit Ethernet cards and plenty of memory to ensure consistent performance.

We only have two 8TB Toshiba N300 and 8TB WD Red drives, which isn't enough for matching four-drive arrays. Those products sit on the sideline for this section of our testing. We added an array of four 8TB Seagate Enterprise NAS drives to fill the void.

We also have arrays with four 10TB Western Digital Reds and 6TB Red Pros. The 6TB HGST Deskstar drives also carry over to the NAS testing.

We're focusing on the 12TB Seagate IronWolf, but we also have the downstream 10TB model. We haven't published a review of the 10TB model, but it has a strong pricing advantage over the larger 12TB drive. We run all the drives in our tests in four-drive RAID 5 arrays.

We don't see any separation between the arrays during the sequential read tests. The drives keep up with the network without breaking a sweat. The drives absorb the peak network bandwidth at QD2.

We found a lot of variability with 256KB and 512KB data. The 128KB sequential write workload saturates the network again.

The two IronWolf HDDs fall in the lower performance tier in this test. This test runs at QD4 and the results line up with the single drive test results.

The IronWolf array trails the rest of the contenders. Interestingly, the 10TB IronWolf array performed very well. Testing over a network with devices optimized to deliver solid performance with a low power ceiling is challenging. Consumer NAS tend to prioritize low power over performance. Consistency suffers as a result.

We test random performance with increasingly large chunks of data. Most of your data transfers will be sequential, but Microsoft's Hyper-V tends to make heavy use of 4KB data. VMWare, on the other hand, tends to use 8KB.

This test stresses both our system and the drives. When you put the hammer down, the 12TB and 10TB Seagate IronWolf drives deliver more performance than the competing 5,400-RPM Red.

iSCSI is my favorite storage technology, but most people have never heard of it. If you have several computers at home, iSCSI is a great way to consolidate mass storage in a single device. Each system only sees the provisioned volume you allow it to see. The best part is the volume presents itself to your PC as a normal volume. You can do the same with a mapped drive across the network, but some games and other software can't see or use mapped drives as local storage. With iSCSI, it's like the drive is right inside the computer. It's easy to see how this technology makes life easy if you have kids with large Steam collections but small form factor PCs.

We're not surprised to see the Seagate Enterprise NAS leading the performance chart because it is designed for this environment. The Seagate IronWolf drives trail close behind, but the Western Digital Red 10TB isn't that far behind, either.