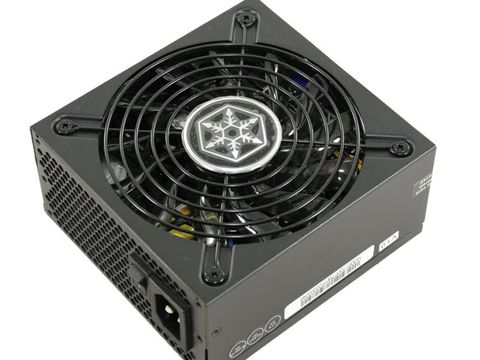 SilverStone recently introduced its second SFX-L offering, which packs a lot of power for such a small PSU. However, despite a list of high-end paper specs, we can't say the finished product is good enough to impress us. For starters, our sample had a problem with its over-power protection, so it broke down under 1040W of load. Naturally, that's way too much for a 700W PSU. This is a major flaw in our opinion.

The SX700-LPT's direct competition is Lian Li's PE-750, and that model offers up to 50W more, along with amazing efficiency levels. Of course, the PE-750 has some significant flaws of its own like a 85°C/low-capacity bulk cap (similar to the one SilverStone uses) and a sleeve-bearing fan. Needless to say it isn't ideal either. But SilverStone's only advantage over the Lian Li unit is a longer warranty (by one year).

Given the close relationship that SilverStone enjoys with Enhance Electronics, we wonder why it didn't use that company's SFX-L platform, which outperforms the Sirfa design. More than likely, Sirfa's solution was more affordable.

Besides the OPP problem we spotted, we don't like the fact that there is no inrush current protection, which we'd expect to find in the form of an NTC thermistor and bypass relay. High inrush currents can cause trouble to your home's electrical infrastructure and trip circuit breakers.

Despite its deficiencies, the SX700-LPT has several strong points worth noting, including high efficiency, good load regulation at +12V and super-tight regulation of the 3.3V rail, decent ripple suppression up to full load, high-quality filtering caps on the secondary side, and quiet operation at normal temperatures. With a larger and higher-temp bulk cap, an FDB fan, and properly-functioning over-power protection, the SX700-LPT would be dramatically improved. Since our sample comes from the first version of this model, we can only hope that later implementations incorporate changes. SilverStone is one of the few companies that clearly depicts the version number of its offerings, so enthusiasts can verify this detail before making a purchase. If a new version of this PSU rolls out, it'd be smart to grab it over one from the first production batch.

Prev Page Performance, Performance Per Dollar, Noise, And Efficiency Ratings
4 Comments Comment from the forums
Be In the Know