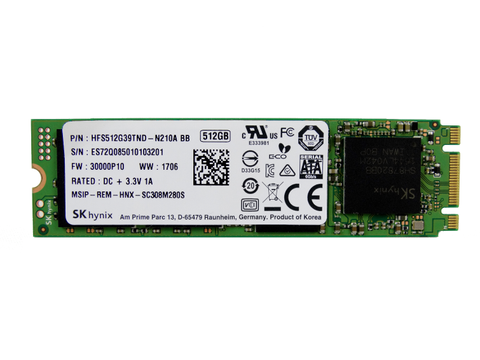 SK Hynix delivered a consumer SSD that works best under heavy workloads like those found in professional audio and video applications. The SSDs are much faster than hard disk drives at basic applications like Word and Excel, but there are better choices available, like the SL308. If you run heavy workloads then the SC308 is an option.

SK Hynix's new mainstream consumer SSD began popping up for sale last month, but it has been shipping for some time inside big box store notebooks. The SC308 comes to market in 2.5-inch and M.2 2280 single-sided SATA form factors, but the flash is the most interesting feature. The SC308 comes with high-performance multi-level cell (MLC) NAND, but it sells at TLC prices.

Consumer SSDs have been in a funk for nearly a year. I'm not talking about the soaring prices due to the NAND shortage, or the current crop of DRAM-less models that perform like 10-year old SSDs. I'm referring to the three-bit per cell (TLC) NAND that neuters performance. That’s disappointing for a technology built from the ground up to go fast. For the most part, TLC took the steam out of the locomotive that was high-performance SATA. You can still find high-performance SSDs, but only if you break the piggy bank.

NVMe has a firm grip on the performance market, but not everyone has a computer that supports the speedy protocol. There is still a market for SATA MLC SSDs, but it's shrinking with every new PC purchase. That doesn't mean anything if you’re on the SATA side of the fence and need a quality upgrade at a reasonable price.

SK Hynix hit the middle ground with the SC308 MLC-based SSD. Unlike the new TLC products, the SSD doesn't feature an SLC buffer to increase burst performance. The dual-core controller does deliver high endurance levels and consistent performance. That's useful for light workstation use, and occasionally professional software. In some ways, SK Hynix's SC308 targets the Samsung 850 Pro. That's both good and bad. The 850 Pro is a very good SSD for heavy workloads, but the 850 EVO overshadows it in desktop use. The SC308 has the same issue. A new NVMe SSD better services those heavy workloads, but not everyone has the extensive list of components to run the new storage protocol. That's the market for the new SK Hynix SC308.

The SK Hynix SC308 comes to market in only three capacities that range from 128GB to 512GB. The series ships in two form factors like many of the mainstream SSD offerings from the fab companies (Intel, Micron, Samsung, Toshiba, SanDisk, and SK Hynix). SK Hynix sells the SSDs in both common form factors to increase sales to OEMs.

The SC308 uses the same controller we found in the SL308. SK Hynix purchased Link_A_Media Devices (LAMD), a controller design house, and continued to build on the original designs. The acquisition gave SK Hynix direct control over all of the major components used to manufacture an SSD; namely, the controller, NAND, and DRAM. Currently, SK Hynix is the only SSD manufacturer besides Samsung that manufactures all of the key components, but Micron will soon join the exclusive club after purchasing Tidal in 2015. We've already mentioned the MLC flash in the introduction. It's a welcome sight after testing SATA-based TLC SSDs almost exclusively in 2016.

The controller appears to be the weak link. Many of the performance traits we found in the original LAMD SSDs have resurfaced with the newer SK Hynix consumer SATA SSDs. The SL308 uses the same SH87820BB controller as the SC308 we're testing. It had a weakness during mixed workloads, so we expect to see the same trend in our testing.

Our SK Hynix SC308 SSDs arrived well before retail availability, so we don't have packaging or extensive pricing information. Tiger Direct lists the SC308 512GB as "coming soon" with a $168.99 price tag. There are a few eBay sellers with drives from system pulls, but prices vary.

The retail products don't ship with any accessories to speak of, but SK Hynix's SSD software management tools work right out of the box.

SK Hynix sent us M.2 SC308's with 256GB and 512GB capacities. M.2 SATA SSDs have keys for both the M and B section. They work in most M.2 slots unless the slot is designated as PCIe-only. Many notebooks and desktop motherboards feature dual-purpose M.2 slots that accept both AHCI SATA and PCIe NVMe SSDs.

The SK Hynix SH87820BB controller is very similar to the original Link_A_Media design. The company has improved on the design over the years by adding support for the latest flash and other features, but we still observe some of the odd behavior that we found several years ago.