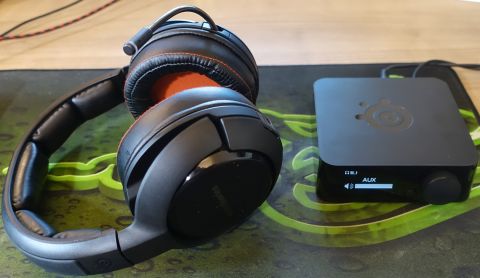 The price tag of $250 (online) doesn't make the Siberia 800 a bargain, however that price justifies itself for those willing to spend top dollar on a wireless solution with features you won't typically find on mainstream headsets.

With a street price around $250, SteelSeries' Siberia 800 wireless gaming headset is certainly not an affordable entry-level solution. It's top-end. At least, that's what we assume based on the price. But is the hardware built to match?

Inside the box, you get the headset, two replaceable battery packs, a base station (holding a transmitter, headphone amplifier, and battery charger), a power supply with four different options for various international outlets, an optical cable, multiple USB cables, and cables for connecting your host device of choice.

To help you keep track of what goes where, and to spare you repeated trips back to the manual, SteelSeries put neat little stickers anywhere the company believed more explanation was necessary.

SteelSeries' Siberia 800 has been on the market for a little while now. Consequently, its price is fairly stable at around $50 below list.

The headset itself feels quite full and compact, largely because of the electronics packed inside. Unfortunately, none of the heft comes from metal construction: the Siberia 800 is made of plastic. Silky-matte surfaces dominate, and the only piano lacquer finish is found on the ear pieces' removable covers. That's the opposite of what most folks would say makes sense, and indeed, every time the shells are opened, you're compelled to wipe everything down to get rid of fingerprints.

Those orange seams in the plush ear pads' faux leather not only look nice, but also match the fabric covering the drivers inside. Visually, there's little for us to complain about. Small gap dimensions speak to the quality of manufacturing, too.

Let's start with the good news, at least for most folks. Foam on the ear pads is rather firm, and it adapts well to anatomic contours. Larger ears may have a hard time fitting completely under the pads, though, so the Siberia 800 ultimately gives you a mix of on- and over-ear coverage. Regardless, comfort shouldn't become an issue so long as the headband is adjusted to apply an ideal amount of pressure.

That takes us to the next point: adjustability, which turns out to be pretty good. Mechanical joints cover the vertical (end of the frame) and horizontal (suspension of the ear piece) axes, making it possible to achieve almost any position you desire. Size adjustments are handled by an extendible frame that can be pulled out pretty far.

All of this flexibility hits its limit for folks with head circumferences larger than 58cm, though. Beyond that, the results are not quite as comfortable. An increase in contact pressure makes the Siberia 800 difficult to wear over longer periods of time. And it's worse if you also wear glasses, since there is no mechanical solution to compensate for that.

SteelSeries' weight specification seems a little optimistic. The scales in our lab measure 325 grams, including the battery, rather than the datasheet's 319 grams. Either way, both values are considerable for a headset, making it critical that you adjust the Siberia 800 properly. Fortunately, customizations are held in place firmly to ensure your position of choice is sustained.

The headband's padding is thick and comfortable, yielding to your contours only where it should.

The headset is designed for wireless operation. That much isn't particularly unique. However, SteelSeries also employs a multi-channel radio solution that, like Wi-Fi, selects the best frequency range to use and even switches to another one if it becomes necessary. Unfortunately, we were unable to determine whether this actually translates to the low latencies that are advertised. But we can say the Siberia 800's connection quality was above average throughout a large lab with lots of devices operating in the same frequency band.

Turning back to the headset itself, the volume knob offers one-button control. Apart from the chat (microphone mute) and on/off buttons, there are no other controls to worry about.

All other connections, along with the battery pack, are hidden behind the ear pieces' two removable covers. The design seems intuitive and neatly implemented, though the aforementioned fingerprints are a pain. In this price range, a carbon fiber finish would have been a better alternative to piano black.

The Siberia 800 relies on rechargeable lithium-ion batteries, and SteelSeries give you two battery packs with a capacity of 1000 mAh each. Assume that ~800 mAh are usable in practice, which should be good for 6-10 hours of continuous operation depending on volume levels and how much you play with the controls. Once depleted, the batteries are recharged by putting them into a side opening on the base station.

As you might imagine then, SteelSeries calling the external black box a mere transmitter doesn't give it enough credit. Under the hood, there is also a large, high-contrast OLED display that looks great even in poor lighting conditions. Moving through on-screen menus is easy to master. One-button control makes navigation a breeze through a combination of pressing (to confirm) and twisting (to select). This is sufficient to reach every option you might need (and there are a lot of them).

The transmitter box also functions well as a mixer, adjusting the volume of various sources individually. For example, you can maintain a balance between in-game sound and chat I/O. It's also possible to affect the sound using various predefined profiles. Furthermore, this adds a rather convenient option for switching between audio sources.

Speaking of sound sources, they obviously require a variety of connectors. The rear panel sports two 3.5mm jacks for audio input and microphone output. In addition, you get an optical input and output, allowing the headset to either accept a digital signal or pass-through to a separate loudspeaker solution.

All of the cables included in SteelSeries' bundle facilitate connectivity with PCs, consoles, and mobile devices.

Conveniently, the ear pieces can be rotated vertically up to 90 degrees, allowing the ~7cm-tall headset to take up less space during transport.

The Siberia 800 also sports simulated Dolby 7.1-channel surround, though we prefer to not use that.

A complete charge takes fewer than 70 minutes to achieve. We imagine most folks will leave the spare battery plugged into the transmitter box, which not only stops charging when maximum capacity is reached, but also maintains the battery over time. When the headset starts beeping to indicate a low charge, simply swap the batteries and you're good to go.

The omnidirectional microphone can be pulled out for use or pushed back into the headset when it's not needed. Pressing the mute button causes a small red LED in the mic to start flashing. We're glad that the Siberia 800 doesn't have any other lights.

A low cut at 100 Hz works well, and clipping at 10 kHz also seems rather reasonable. However, these specifications, which come straight from SteelSeries' website, aren't given a tolerance range. In reality, we measured an effective range between 125 Hz to ~8 kHz, which is still sufficient for a gaming headset's mic. Even the deepest male voices are fully covered, and sibilants never exceed 7 kHz to begin with.

We're using the most neutral settings possible for our benchmarks, avoiding gimmicks like simulated surround sound that mess with audio reproduction. Testing is done with a pure binaural signal, while measurements are taken using a monaural signal (pink noise). The headset's curve, which turns out to be a bit bass-heavy, is free of spikes or other nasty surprises. The only notable peculiarity is a dominance at ~90 Hz. It's about 8 dB above the normalized average at 1 kHz. Fortunately, all other values remain within the tolerance range of +/-3 dB.

Bass boost, especially in the upper bass range, is a bit unreasonable. After all, the impacts and explosions typically found in battlefield noises occupy much lower frequencies. It's certainly enough to allow percussionists to bask in the presence of powerful bass drums, though. Otherwise, that's the only range we consider over-done. Everything else is much better. Even the deepest bass measurements are sufficient.

The mid-range is good, so we are, too. Since the lower-mids are slightly raised, many instruments and voices sound fuller than they normally would. You might love this, or you might hate it. In our opinion, the sound reproduction is somewhat too voluminous, though the acoustic resolution is good. It's not too detailed, but still differentiated enough.

We measure a stable upper mid-range to lower treble range, which rewards us with a respectable sound stage. This is beneficial for spatial location during gaming. The timbre of instruments, voices, and environmental noises remains largely neutral, too.

The slight peak at ~6 kHz and up results in an overemphasis of the sibilants, making several smaller instruments more audible. The sound seems cool, though not metallic. It's definitely better for gaming than for listening to orchestral works.

So, where does all of that leave us? Of course, it's possible to find decent hi-fi headphones with a good amplifier for a similar price. In that case, though, you're tied to a cable and left without a microphone. A headset with the Siberia 800's sound, similar build quality, but no wireless functionality would probably sell for $100 or so.

Thus, the only way to justify a $150 premium is the "transmitter" box and wireless radio. We might be compelled to call that acceptable, since the $300 list price is down as low as $240 on SteelSeries' website.

Averaging about $250 online, the Siberia 800 certainly isn't a bargain. But that price is justified if you're willing to spend top dollar on a wireless solution with features not found on mainstream headsets.

Its sound quality is a little bass-heavy. Otherwise, the Siberia 800 makes for pleasant listening. Level stability is quite good for a wireless device, and the batteries last a relatively long time. Once they're depleted, you recharge the old set and pop in a fresh pack.

The base station with transmitter, various options for manipulating the sound, and plenty of I/O is most certainly the reason SteelSeries' Siberia 800 costs so much. At the same time, this headphone amplifier takes center stage in the package. It's visually attractive, easy to navigate with one knob, Dolby-certified, and highly functional.

In the end, this well-manufactured headset with its sensitive microphone is far from ordinary in terms of price, functionality, and of course connectivity. Fitment on big heads is a bit of a problem, since the pressure becomes uncomfortable. But you either like the Siberia 800 or you go looking for something lighter. Everybody else may feel free to cozy up on the couch and listen to music without the constraints of wires (so long as money isn't an issue, that is).