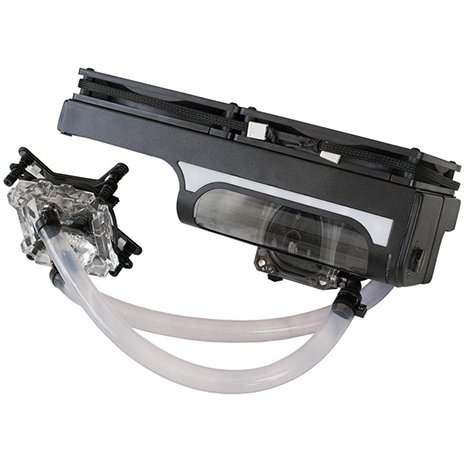 All of the coolers we compared today had more than enough capacity for our overclocked six-core processor, but only Swiftech's H240 X2 has provisions to use that extra capacity to cool the added component of the builder's choice.

Tom's Hardware has tested many cooling devices, but open loops are rarely among them. The reasons for that are numerous, beginning with the fact that most open-loop systems are built from custom-selected components. A rash of complaints always follows any selections made by us, so we leave those choices to the manufacturer. The open loops we've tested have primarily been complete component kits.

The benefit of an open loop should be obvious to anyone who has ever wanted to add an extra component, such as a graphics card block, to their installed radiator and pump. This simply can't be done with closed-loop hardware, at least without hacking it up and voiding the warranty. Most closed loops don't even have the fill ports present on Swiftech's factory-filled configurations.

That's not to say closed loops lack benefits. The previously-mentioned novice can install one of these without worrying about getting the line length right, filling the entire loop, or priming the pump (they don't pump air after all). There's no vent for liquid to evaporate out of or get contaminants into, and no practical reason to blame yourself for a leak (unless you damage something).

Lighting modes are controlled via a tiny button on the fan hub, but the hub also has a pair of pins for those who would like to add an external button. We might have suggested a bay panel switch, if not for the popularity of bay-free cases. Interfacing a motherboard's CPU fan header and powered by a SATA power cable, the fan hub uses that PWM signal to control both the pump and fan speeds.

The H240 X2 is packaged with Intel mounting brackets installed. The motherboard support plate is spaced only for LGA 115x (1156, 1155, 1150, 1151) interfaces, and the top bracket's screw holes are slotted to support the threaded mounts of square ILM LGA 2011x (2011 and 2011-v3). AMD users need only remove their factory four-screw clip bracket in addition to replacing Swiftech's Intel kit with its AMD kit. Users of Intel's LGA 1366 or those with pinned-on AMD clip brackets will need to purchase a threaded support plate separately.

Removing the support plate and protective sticker, we find a highly-polished and supremely flat base on the Apogee XL2 water block. The top bracket is threaded for LGA 2011x, and uses short standoffs to fit the finer threads of the LGA 115x support plate.