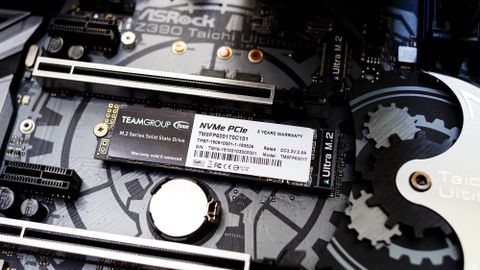 If you’re on a tight budget, Team Group’s MP33 is a great option to help you reach NVMe performance on the cheap.

Team Group’s MP33 is a budget-friendly PCIe 3.0 x4 M.2 NVMe SSD. Dishing out sequential speeds of up to 1.8/1.5 GBps read/write, it offers significantly higher performance than any SATA SSD available. Plus, it comes with a five-year warranty and respectable endurance ratings. If you are in the market for something in the NVMe flavor, Team Group’s MP33 1TB is a great bargain option to consider.

SSDs launch into the market rated at certain speeds and stay on the market for a few years before they begin to get phased out due to various reasons. That could be due to dwindling sales, supply changes, or just because the company has a new product release scheduled for every 18 months on the calendar. Because of this fast-paced product cycle, most SSDs retain the same hardware from when they were launched up until they are phased out. At least, that is how it is with the more expensive, brand name ones.

When we dive into the budget arena, we sometimes see companies do strange things. Price is key and lower cost drives sell faster than higher-cost ones. In order to maintain competitive pricing, SSD vendors must find ways to lower the build cost on these lower budget-oriented SSDs. The most common route we see companies take is to go with a DRAMless SSD controller and find cheaper NAND, or sometimes they'll just use whatever is available at the time.

When designing a budget SSD, it isn’t uncommon to find different hardware for the same model a year, or even months, after launch. As long as the initial specifications are matched or exceeded, the parts change isn’t that big of a deal. It is only when manufacturers start swapping out to inferior hardware that we start to take notice.

When the MP33 first launched, it came out with a Phison E13T DRAMless NVMe SSD controller and a three-year warranty. Interestingly, the hardware powering our new review sample differs from the originally launched unit. Instead of a Phison controller, the new versions come with Silicon Motion’s SM2263XT DRAMless NVMe controller as well as a few other bells and whistles. Unlike most changes we’ve seen in the past, Team Group’s MP33 looks to be one for the better.

Team Group’s MP33 PCIe 3.0 x4 NVMe 1.3 SSD comes in capacities that span from 128GB all the way up to 2TB. For a budget-oriented gamer or one just looking to save a few dollars, pricing is fairly low and competitive.

Performance-wise, the MP33 is rated to dish out up to 1.8/1.5 GBps of read/write throughput and 220,000 / 200,000 random read/write IOPS of peak performance. Bear in mind that this SSD features an SLC write cache, so, its write performance can degrade during large write transfers.

Team Group backs the MP33 with a five-year warranty and rates the endurance fairly competitively per capacity point. Rated to write for up to 600TB within its warranty, our 1TB sample has the same up to endurance rating as the Samsung 970 EVO Plus and WD Black SN750, which are both pricey high-end alternatives. The MP33 also supports S.M.A.R.T. data reporting, Trim, and secure erase via the Format NVM command.

Team Group has an SSD Toolbox available for download. It allows you to monitor your SSD’s lifespan and usage. It also allows you to clone your data, although migration isn’t supported on NVMe products.

Our MP33 sample features a black PCB, but a rather unappealing sticker and the green indicator light take from the aesthetic. It comes in an M.2 2280 single-sided form factor, meaning all components are on just one side for thinness.

The SSD is powered by Silicon Motion’s SM2263XT 4-channel NVMe controller. It has a dual-core ARM Cortex processor at its heart and features a DRAMless architecture. Normally the DRAM cache is used by the controller for caching flash translation layer FTL data. Performance typically suffers without the cache–that is, without Host Memory Buffer (HMB) technology.

Silicon Motion designed the SM2263XT to utilize HMB to cache FTL data on the host’s DRAM, thus eliminating the controller’s need for it onboard the SSD. Only a small amount of DRAM space from the host system is needed (typically about 32-128MB).

Micron’s 3rd-gen 96L 3D TLC interfaces with the controller at speeds of up to 667MT/s. At 1TB, our sample comes with four NAND packages on the PCB. Within these are sixteen 512Gb (64GB) NAND die, which are distributed 1 die per chip enable (CE), and four per channel. The MP33’s NAND endurance comes thanks to Silicon Motion’s NANDXtend ECC, which is the company’s low-density parity-check code. This, along with end-to-end data path protection, ensure your data stays safe.