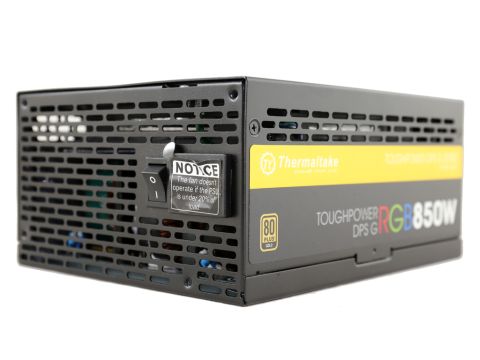 Although Thermaltake uses a solid CWT platform with high build quality and good components, the outcome is still far from impressive. Its TPG-0850D-R isn't as efficient as competing Gold-rated units, its hold-up time (and especially the power-good signal's hold-up time) is lower than the ATX spec's requirements, and load regulation on the minor rails is very loose.

To make matters worse, we noticed a bad behavior on the +12V rail during the power-off to full load turn-on transient test, and ripple on the same rail with full load increases notably compared to the 90% load test's results. We admit that we pushed the PSU hard during our full load and overload tests, since the ambient temperature inside our hot-box reached 48°C. But Thermaltake states that this PSU is able to deliver its maximum power continuously at up to 50°C ambient, so we weren't beyond the TPG-0850D-R's official specs.

We've talked about the bad aspects of this product, so let's cover some of its positives, too. First up is the TPG-0850D-R's quiet operation. Thermaltake equips the PSU with a low-speed, high-quality fan, which is combined with a conservative fan profile. Another major advantage is Thermaltake's extra-long warranty. Given the HDB fan and Japanese electrolytic capacitors, the company is confident in this platform's reliability over time, which it demonstrates with 10-year coverage. And we think the SPM platform is an asset to this PSU, although the DPSApp needs a redesign in order to get rid of the outdated Flash interface.

The number of provided PCIe, SATA, and peripheral connectors is sufficient. However, we cannot understand the reason for only including one EPS connector. A PSU with 850W capacity will be most likely used in a high-end system with an advanced motherboard. Those often need more juice for the CPU, and a single EPS connector might not be enough. It is dangerous to use EPS adapters since four-pin Molex connectors, which are commonly used by these adapters, aren't designed to handle such high currents. Thermaltake should at least provide a couple of EPS cables/connectors and let its customers decide between two EPS and four PCIe connectors, or a single EPS and six PCIe connectors.

Finally, with a price tag of $180, the TPG-0850D-R doesn't stand a chance against similar offerings from Corsair, EVGA, Seasonic, XFX, and other companies. The MCU that this PSU utilizes surely plays a role in the high price. For the moment, though, it's more of a gimmick than an asset. It might enable digital monitoring and limited control over the fan, either remotely or locally, however, we'd prefer if it was instead used to control some of the PSU's major functions, improving performance.

Prev Page Performance, Performance Per Dollar, Noise, And Efficiency Ratings
12 Comments Comment from the forums
Be In the Know