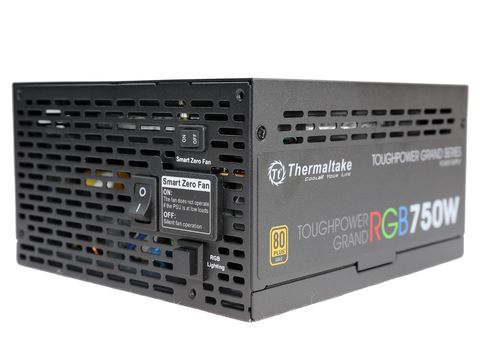 Thermaltake used the best version of this Gold Sirfa platform. The TPG-0750F-R is highly efficient and has excellent ripple suppression. Given its good pricing scheme, the Japanese caps and the HDB fan, it is definitely worthy of your attention.

Thermaltake obviously really likes the idea of RGB lighting, given that so many of its recent models employ it. The company's Toughpower Grand RGB Gold Series consists of three members with capacities ranging from 650W to 850W. Contrary to the DPS RGB PSU models, there is no digital interface. As a result, you cannot configure the LED RGB lighting through software; instead, you have to use a push-button on the front of the PSU.

All three models are 80 PLUS Gold-certified and come equipped with a 140mm RGB fan featuring 256 colors. Thankfully they include a built-in memory function that remembers your last selection. This is very convenient because you won't have to select the RGB lighting mode each time the power supply is turned back on.

We're looking at the middle model of Thermaltake's Toughpower Grand RGB Gold line today, the TPG-0750F-R, rated for 750W of maximum power. Its aforementioned button allows you to switch through a 256-color RGB cycle or turn the lighting off completely. In order for the fan's LED lighting to be in clear view (given that you have a windowed chassis, of course), Thermaltake recommends installing the PSU with its fan facing upwards. The company also claims this configuration facilitates lower temperatures inside of your case.

Two IR shots on the product's webpage show the internals of a running PC with the fan facing up and down. Clearly, the first shot depicts lower temperatures. However, we can't help but wonder about the effectiveness of a PSU fan aiding thermal performance, given that it's installed at the bottom of your chassis with its fan sucking air. It's common knowledge that hot air rises, so if we want to improve airflow inside a chassis, we have to help move hot air up and out with fans installed on the top or back. We'll have to revisit this topic in a story about PSU orientation and its effect on case cooling.

An 80 PLUS Gold certification means this PSU has to be at least 87% efficient at 20% and 100% of its maximum power. Under typical loads of 50% maximum-rated capacity, it should hit 90% or higher efficiency. Gold-class PSUs used to be super expensive. They're a lot more affordable now, though, making 80 PLUS Silver basically obsolete.

Sirfa manufactures the PSUs in this family, arming them with all of the necessary protection features except for inrush current protection. We're happy to see the max-rated temperature for continuous full-power delivery is 50°C, just as the ATX spec recommends.

A 140mm HDB Riing fan uses blades designed for high static pressure requirements, offering increased airflow to the PSU's internals. The hydraulic bearing augments reliability over time and also helps reduce operating noise. Further, Thermaltake uses rubber pads on the fan frame's corners to absorb vibrations. A semi-passive mode makes it possible to achieve silence under light loads. Or, if you'd rather have some air flowing through the PSU at all times, a switch on the PSU's front allows this feature to be deactivated.

Thermaltake affixes a highly competitive ~$100 price tag to the TPG-0750F-R, and a 10-year warranty instills confidence in the product's quality. Not long ago, only a handful of high-end PSUs were covered by such lengthy warranties. But tough competition is forcing everyone to rethink their guarantees. Only time will tell if this is a good move in the mainstream space. Then again, so long as manufacturers use high-quality components, it's not unreasonable to expect 10 years of service under normal operating conditions.

Don't put all of your eggs in that one basket, though, particularly if you live in an area prone to frequent thunderstorms or brown/black-outs. The quality of your incoming power affects the PSU's longevity. Consider putting your whole PC behind an uninterruptible power supply, or at least a surge protector. In our lab, we use numerous UPS'. And although the mains network is bad where we're at, we've never had a PSU fail for mains-related reasons.

The minor rails have more than 100W combined capacity, while the +12V rail can deliver up to 62.5A. It's strong enough to support a couple of high-end graphics cards, to be sure. Finally, the 5VSB rail is a little bit stronger than what we're used to.

Unfortunately, Thermaltake only gives you one EPS cable/connector, restricting the PSU's compatibility with high-end mainboards that need more power in the CPU area.

The number of PCIe connectors is sufficient for a 750W power supply, and the same goes for the available SATA and peripheral connectors. Cable length is adequate, and the distance between connectors is long enough to avoid compatibility issues. Some folks do prefer shorter runs between PCIe connectors since graphics cards with two auxiliary inputs have them installed next to each other. We're agnostic on this issue, though.

Next Page Packaging, Contents, Exterior, And Cabling
11 Comments Comment from the forums
Be In the Know