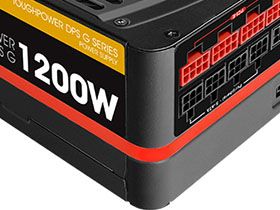 The TPG-1200D-P uses quality components and has good build quality. Its performance is good but definitely not record breaking. Only with lower ripple at +12V and a larger hold-up time, it could meet eye-to-eye the top performing units in this high-end category. A lower price would boost its sales, as well.

Thermaltake used to rely heavily on CWT (Channel Well Technology) platforms for its high-end PSUs. That looks to be changing though; many of the company's best products, including the DPS G Platinum models, now come from Enhance Electronics. The semi-digital family that Thermaltake recently introduced includes three members with capacities ranging from 850W to 1200W. They're all powerful enough to drive potent PCs, which means enthusiasts will be looking most closely at them.

The DPS G series includes a digital interface that facilitates monitoring of the PSU's status, along with limited control of the fan's operation. Thermaltake offers a complete software solution called Smart Power Management (SPM), through which you can easily check the PSU and configure it to notify you if something goes wrong (a fan failure, for instance). The company believes its SPM suite will encourage enthusiasts to reduce their CO2 emissions through more efficient use.

This unit also features Haswell compatibility and a high temperature rating, meaning it can deliver its full output continuously up to 50 degrees Celsius if needed. We found out during our tests this isn't always true, though (the over-temperature and fan failure notifications appeared at above 47 degrees C due to a software limitation).

The protection suite includes everything you'd expect except OCP. And although the double ball-bearing fan is reliable, it's also noisy under stressful operating conditions. Through the DPSApp suite, you are able to choose between normal, silent and semi-passive fan modes. However, you don't have the option to create your own fan profile; in our opinion, that's a notable downside. At least Thermaltake includes a seven-year warranty. Currently, only EVGA and Corsair offer longer coverage on their high-end models.

The minor rails are strong enough to support most modern systems, although there are other 1.2kW PSUs offering even more capacity on those rails. The +12V rail is rated for an impressive 100A maximum current, while the 5VSB rail is comparatively weak. PSUs in the >1kW range should deliver at least 3.5A-4A on 5VSB.

As you'd expect, Thermaltake includes a ton of cables. The TPG-1200D-P supports up to eight PCIe connectors and two EPS ones, all of which are available at the same time. If you have the money to spend, this PSU lets you match up four high-end graphics cards to a server-oriented motherboard hosting a couple of Xeon processors.

Except for the USB header cable that connects the PSU to your platform, cable length is satisfactory. Still, it'd be nice if the EPS cables were even longer (>650mm). The distance between connectors is ample and Thermaltake includes a couple of FDD adapters in case you need Berg connectors. Finally, the 24-pin ATX, EPS and PCIe cables employ 16-gauge wires, while the others use standard 18-gauge wire.

Next Page Packaging, Contents, Exterior And Cabling
8 Comments Comment from the forums
Be In the Know