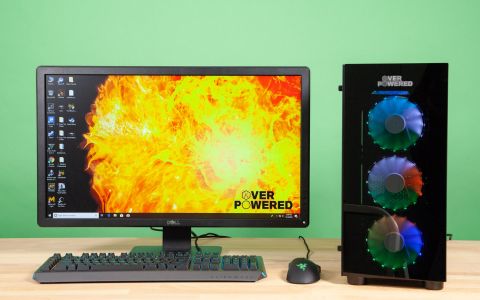 Walmart’s Overpowered Gaming Desktop DTW3 is cheap and offers solid gaming performance, but those savings come from questionable parts, which are housed in a questionable design.

Gaming is an expensive hobby, thanks not only to regular purchases of new titles but also because of the price of powerful hardware. But Walmart, known for its bargain-bin pricing, and Esports Arena have teamed up to produce the Overpowered Gaming Desktop DTW3 ($1,699, no availability in the UK), a slightly underpriced gaming desktop that had to cut some corners to save some money. Sure, you can save a few bucks and get a solidly specked GTX 1080 desktop, but we’d rather spend a little more money for a product from an established brand with quality components inside.

The Overpowered DTW3 is a big, gaudy tempered glass box. And not only is it ugly, but it’s not great for airflow.

Well, I think that it’s ugly. The box has three fans in the front, all of which have very visible LED lights around the rims to provide an RGB-style experience (a fourth fan, in the back, is the same way). The box is a very dark tempered glass, which emphasizes the effect. This could potentially be cool if there were more RGB parts inside the case, but it just makes it hard to see any parts that aren’t the fans.

The Overpowered branding is impossible to miss. There’s a badge with the full name on the front above the fans and a massive “OP” decal on the left side. The “O” features the Esports Arena logo (that’s an organization with a few Esports training facilities, mostly in the western United States), which looks a lot like two people preparing for a romantic embrace.

The right side panel, however, is solid metal that covers the cable management.

Outside of controlling the LEDs with software, there is an LED button on the top of the case to cycle through effects. Additionally, the desktop comes with a remote control for different colors, speeds and patterns.

And while I think that the design is over-the-top, many in my office who were attracted to our testing lab by the flashing lights thought it looked cool. Most of them are people who shop at big-box stores and would never build a gaming desktop, so it’s possible that while I’m snobbish about it, Walmart is doing something right with its aesthetics. If you want your attention grabbed, this light show will do it.

My big issue with the design from a functional perspective is that there’s not much room for airflow in the front. The glass leaves almost no space for air to come in through the intake fans, and there’s also no dust filter to keep the whole thing clean (there are two dust filters on the bottom of the machine). In the long run, that can lead to some high temperatures.

The port situation on the DTW3 is pretty standard. On the top, there’s the LED button alongside the microphone and headphone jacks, a pair of USB 3.0 ports and a single USB 2.0 port.

Most of the DTW3’s innards are accessible by removing the glass panel on the left side. That comes off with four thumb screws. If you want to take out the GPU, you’ll need a Phillips head screwdriver to remove the support bracket.

To get to the power supply and storage, you’ll need to remove the right metal panel, which is held into the back by two more thumb screws. Our configuration had a SATA SSD and a hard drive in the drive bay, and the mess of cables from the PSU were all hidden beneath a PSU shroud.

In general, the cable management isn’t horrendous. It’s handled decently in the back, though there are definitely a handful of cables connecting to the motherboard that should have been re-routed for a cleaner look. At least all of the parts are standardized, so you can replace them.

We know other reviewers have seen glue on certain Overpowered Gaming Desktop models. But we detached all of the cables on our DTW3 and found no adhesive at all. We only tested this model, though, so we can’t speak for its presence on the DTW1 or DTW2.

With a GTX 1080 Ti packing 11GB of VRAM,  it should be no surprise that the Overpowered DTW3 was able to run our gaming benchmarks with aplomb. When I played Seraph’s skirmish mission in Call of Duty: Black Ops 4 at 4K and the highest settings, it ran between 59 and 64 frames per second (fps). When I dropped it down to 1920x1080, it reached a smoother range of 166 to 197 fps.

On Hitman (FHD, ultra settings), it ran the game at 142 fps, easily surpassing the 93-fps average (which includes systems with lesser graphics cards). When I ratcheted the benchmark up to 4K, it dropped to a still-playable 68 fps.

On Rise of the Tomb Raider (FHD, very high) it ran at 93 fps, again surpassing the average of 71 fps. But it dropped to a flat 30 fps at 4K, making it just playable.

It earned a perfect score of 11 of the SteamVR performance test, surpassing the average of 9.6.

I also ran a stress test on the DTW3, which involved running our Metro: Last Light benchmark 10 times in a row on very high settings at 1920x1080, simulating roughly half an hour of gaming. The Walmart PC played the game at an average of 95.5 fps, running between 94 and 97 fps in each run. The CPU ran at an average of 3.6 GHz and an average temperature of 54.6 degrees Celsius (130.3 degrees Fahrenheit).

The Overpowered DTW3’s Intel Core i7-8700 CPU, 32GB of DDR4-2400 RAM, 2TB, 7,200-rpm HDD and 256GB SATA SSD should be enough for most users to get through their workflows without issues. I did experience a surprising amount of slowdown on occasion while just using the file manager and opening and closing programs. But when it was running smoothly, I could get my usual 25 or so tabs in Google Chrome, as well as an FHD Twitch stream without any problems.

On the Geekbench 4 overall performance test, the DTW3 earned a score of 23,722, surpassing the gaming desktop average of 20,153.

Besides the usual junk included in Windows 10, like Netflix, Candy Crush Friends Saga, Fitbit Coach and Drawboard PDF, the DTW3 doesn’t have any extra bloatware on it. None.

Besides the Gigabyte-branded motherboard and GPU and Intel’s CPU, there are a lot of cheap parts in this rig. The SSD is a SATA drive from Adata, which isn’t bad, and the hard drive is from Toshiba (oddly, it was partitioned into four equal parts).

But it gets scarier when you get to the CPU cooler, with a fan from Coonong, and the power supply from Great Wall. If you haven’t heard of these companies, well, I don’t blame you. They certainly don’t have any well-known reputation to go by (and I doubt that PSU has any sort of 80 Plus efficiency rating), so you’re definitely getting at least a few less-than-stellar parts even though you're paying $1,699.

For those who want something in-between, the $1,499 DTW2 has a GTX 1080 but is otherwise identical specs to the DTW3.

Is This a Deal?

Walmart is known for its bargain prices, but the Overpowered Gaming Desktop DTW3 isn’t exactly cutting any prices.

If you’re looking to get a pre-built machine, there are other sellers with better reputations who may give you better parts for a similar price.

Building an HP Omen Obelisk, I went just over $1,800 for a system with a GTX 1080, but at least I know I’m getting HyperX memory and a 500-watt power supply with an 80 Plus bronze efficiency rating.

Granted, every other pre-built PC at other builders, like Falcon Northwest, is expensive (its Talon and Tiki start at $2,200).

But here’s the thing: I couldn’t get it cheaper. Those no-name components do cut costs. And some people really just want the cheapest thing, not the best thing, though I wouldn’t recommend that.

Immediately upon launch, the internet decided to love to hate the Overpowered Gaming Desktop DTW3. Esports Arena could maybe do a gaming PC, but Walmart? Well, there’s a lot going wrong here, but the hate is somewhat misplaced. For someone who is truly looking for a bargain above all else and has no interest in building their own, it’s hard to beat the price, and the GTX 1080 Ti still offers solid performance.

No, the cooling situation isn’t great. No, there’s not great RGB control. No, the cable management is far from perfect. What I suggest is that, if you can afford it, you go to either a local computer store or a vendor with a solid reputation and spend $100 to $200 more for a machine with better air flow and higher-quality parts.

Yes, it’s cheap, but if you’re going to buy a PC, you want it to last years and run well. I appreciate Walmart’s freshman attempt, but there are too many little mistakes and curious part choices to wholeheartedly recommend it. If price is everything, consider this. Otherwise, look elsewhere.