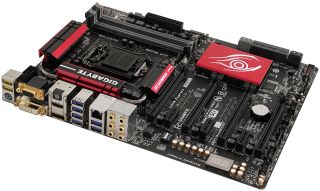 We all love extras, though not all of us can agree on which ones are the best. Some people still love a New York-style cheese pizza, for example, though they’ll want an extra slice if they’re hungry.

In the PC world, anyone who can afford a few extras first needs to buy a motherboard that supports them. Run out of expansion slots, but need Wi-Fi? You’ll have to sacrifice a USB port for that, unless you can find a motherboard with an on-board controller. Want more than two graphics cards in SLI? That might call for a step up to Intel's high-end X99 platform, unless you're comfortable paying extra for a PCI Express-based bridge chip able to take Haswell's 16 lanes and turn them into 32.

You won’t find such an expensive component on motherboards priced under $220. In fact, right around that range is still fairly price-sensitive. Welcome to Z97’s “High End”, where the enthusiasts who eschew the overpriced top-end stuff can still find just about everything they want. But if your wants include top shelf wireless networking and three-way SLI, well, you’re going to need to make a decision: