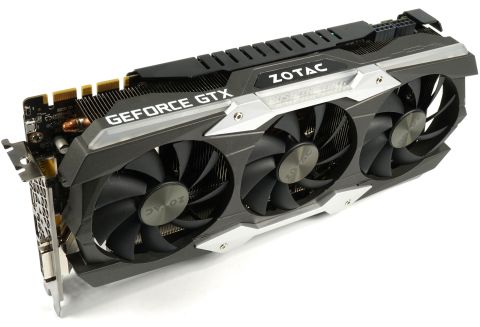 Manufacturers can claim whatever they want in their marketing material. Actually achievable clock rates are subject to a number of hard-to-control variables, though. GPU quality, for instance, plays a big role, and there's no way to pre-screen what you get on that front. So, it's absolutely possible that a nominally slower card made by one board partner ends up faster than a more aggressively-tuned model from another partner. As a result, comparisons between products have to be approached with an understanding of some inherent uncertainty.

Board vendors can, however, control the settings and environmental factors that affect how GPU Boost ultimately determines operating frequency, depending on the situations it encounters. Beyond specifications like the power target or clock offset, temperature under load is perhaps the most influential factor in defining sustainable performance.

For Zotac's GeForce GTX 1080 Ti AMP Extreme, we measured an initial GPU Boost frequency as high as 2012 MHz during our gaming loop. As the card warmed up, it maintained an average of ~1974 MHz during our 30-minute measurement. That's an impressive result for a hot card.

With a slightly higher power target and more aggressive cooling settings, it's probable that 2.0+ GHz could be sustained inside of a closed case.

Of course, the card does tolerate some additional overclocking. In our case, we achieved a stable 2067 MHz under air cooling, though we did have to significantly adjust Zotac's fan curve to bring temperatures down. This results in extra noise you might not want.

If you plan to overclock, consider increasing the power target to its maximum. The table below contains results after configuring our card in Afterburner and a long test run in The Witcher 3.

As long as temperatures stay under 65°C during gaming workloads, 2067 MHz is feasible and can almost be permanently maintained aside from the occasional dip. But that's a matter of winning the GPU lottery; not every card will fare as well.

Getting a good overclock from your memory requires perseverance and a bit of luck. Seemingly stable settings might work short-term, and then prove dicey after a few hours of gaming. In the case of our sample, an extra 300 to 350 MT/s was feasible. Beyond that, performance started sliding the other direction.

A 66°C measurement from the GPU diode on an open test bench isn't bad. At the same time, though, the chip's packaging reads an alarming 73°C. The cause traces back to lackluster cooling of the MOSFETs and chokes. As they warm up, their thermal energy is absorbed back into the PCB. Copper paths in the board transfer this heat around unconstrained.

In a closed case, the GPU temperature rises to 68°C, while the package gets all the way up to 76°C! Better VRM cooling is sorely missed in this situation, as the GPU die is forced to cool the PCB through its hot package. Although the beefy thermal solution effectively keeps the processor running at safe temperatures, it's no surprise that we encounter unnecessarily high fan speeds.

Naturally, the measurements don't improve under our stress test, even on an open test bench. At a GPU diode reading of 65 to 66°C, the package hovers just under 73°C (a difference of up to eight Kelvin).

It can always get worse, though. In a closed case, the difference between GP102 and its package reaches as high as nine Kelvin.

On average, the temperature we measured on the GPU's package was between six and nine Kelvin higher than what we read from the chip's diode. Again, this is due to less-than-ideal cooling of the voltage regulation circuitry. Those small, finned heat sinks we photographed are simply insufficient.

None of the components hit critical levels of thermal load. But the fact that Zotac's GPU cooler, across several bends and corners, takes over the task of VRM cooling indicates how much of the design's potential is wasted. The resulting disadvantages are difficult to ignore. There's noise, for one...

Before we present our findings, remember back to our review of Zotac's GTX 1080 AMP! Extreme, where we found its fans prone to starting and stopping. They'd fall to too-low of a speed (below 650 RPM), practically forcing them to stop. Then the card heated up enough to justify sufficiently high speeds (around 800 RPM), allowing them to spin unhindered.

Now let's take a closer look at this board's fan curve. The short "on" pulse is set to a significantly lower value, followed by a longer period where the fan speed is kept at the minimum (a little higher than 800 RPM). It's only later that the fan starts spinning faster, corresponding to the card's heat.

Zotac is still using similar, if not identical fans, though. So we asked ourselves how it's suddenly possible to have a semi-passive mode on this card. Since the observed behavior makes it seem like a second, proprietary fan control is overriding the BIOS, we conducted a little experiment.

We forced the PWM signal to 100% for an idle GPU temperature of about 100°F (38°C). You'd expect the fans to go straight to their maximum RPM at that point. But although monitoring software like GPU-Z and Afterburner confirmed the desired 100% setting, the fans remained silent.

Next, we warmed the card up using our gaming loop. As soon as the GPU diode measured 50°C, the fans suddenly jumped to 100%, confirming our suspicion that there's another fan control loop at work. Exiting the game, Zotac's GeForce GTX 1080 Ti AMP Extreme cooled down. As soon as it hit 49°C, the fans fell silent once more, even though the software still showed us the override at 100%. Whether Nvidia knows about and endorses this unusual (yet clever) solution remains a mystery. At least it works.

When the fans weren't at their maximum speed, we were bothered by the noise coming from the voltage regulation circuitry. Taking a closer look at the spectrum, there's a distinct peak between the range of 8.2 and 16 kHz.

For most other cards, the affected frequency range is significantly higher (16 kHz and more), since the DC/DC converters operate at 400 kHz and beyond. But Zotac's clock doublers, responsible for turning eight phases into 16, cut this card's switching frequency in half. Though that might ultimately help with temperatures, it also causes the issues identified in our acoustic analysis.

Using our special temperature-controlled anechoic chamber, we took a maximum reading of 38.5 dB(A), which is an acceptable result given the relatively low GPU diode temperatures. We're more bothered that the big cooler's potential is never fully realized, since it only absorbs heat from the GPU die.

For what it's worth, Palit ran into this very same problem with its GeForce GTX 1080 Ti GameRock Premium Edition, but addressed it in a more effective way. In addition to a VRM heat sink, the company introduced an improvised cooling surface with fins modified to form a 90-degree angle.