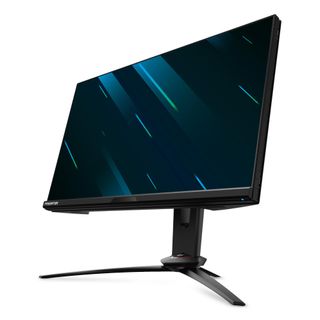 Holy hertz! Our jaws dropped when Asus first announced a gaming monitor with a 360 Hz refresh rate back in January. Alienware, which has already pushed the limits on gaming displays with its massive OLED venture, is also on the 360 Hz bandwagon. Acer won’t be left out of the 360-Hz circle: the Acer Predator X25 announced today will also arrive with the mind-boggling 360 Hz max refresh.

All that said, we’re not sure which vendor will be the first to actually sell a 360 Hz monitor. Acer didn’t share a release date or price for the Predator X25.

We do know that the monitor will be 24.5 inches with 1080p resolution. For those with the best 4K gaming monitors on their mind, that doesn’t sound like a lot of pixels, but this is expected for hitting 360 Hz. The monitor is supposed to fight screen tearing with the help of Nvidia G-Sync. Plus, it’s not like there’s a graphics card that is even close to being able to push 4K at close to 360 Hz anyway.

If a top-of-the-line refresh rate isn’t enough of a premium feature for you, the Predator X25 throws in additional luxuries. With AdaptiveLight, the monitor can project a light onto your light that matches what's on your screen. With LightSense, that light can also sync up with music. The screen can also change its brightness based on the amount of lighting in the room. Meanwhile, Acer’s ProxiSense technology serves as a pseudo-mother, reminding you to take a break from gaming (go out and meet someone nice!) after a certain amount of time.

Acer didn’t provide a lot of other information about the Predator X25 in materials shared with the press, but did say that it will support tilting (25 degrees backward, 5 degrees forward), swivel (30 degrees) and height adjustment by 4.7 inches.

Right now, the fastest of the best gaming monitors can hit a 240 Hz refresh rate. But in order to meet ultra-fast refresh rates, you need a powerful graphics card and will often have to turn eSports titles, like Overwatch and Counter-Strike: Global Offensive down to the low settings. Demanding AAA titles are out of the question when it comes to 360 Hz or even 240 Hz. These 360 Hz screens are really made for professional gamers-- and for showing off.

We haven’t seen the Acer Predator X25 or Alienware AW2521H in person, but we have tried out the Asus ROG Swift 360. A Dota map scrolling at super speed was much more readable with the text slightly more legible compared to a 240 Hz monitor sitting next to it. If you’re someone used to gaming on a monitor with a refresh rate of 144 Hz monitor or less, the differences would probably be even noticeable.

Nvidia has claimed that a 360 Hz refresh rate can boost flick shot aiming test performance by 4%, and Asus said its ROG Swift 360 can draw 50% more frames per second than a 240 Hz gaming monitor. But unless you’re a highly skilled pro gamer, we don’t expect you to immediately notice or need the purported gains of 360 Hz.

That still hasn’t stopped a trio of 360 Hz announcements this year. We’ve also seen numerous 300 Hz gaming laptops announced. It’s all pushing the limits of what graphics cards can do and what mainstream gamers actually want.

Needs and wants aside, 360 Hz is certainly an achievement. So which 360 Hz monitor looks best? Well, based on specs it seems quite likely that Acer, Asus and Dell’s 360 Hz monitors are all using the same 24.5-inch panel. Alienware has specified that it’s using an IPS panel, but we haven’t seen confirmation from the other 360 Hz players. Design, feature set and final pricing will probably be the deciding factors for those considering these new next-level gaming monitors.