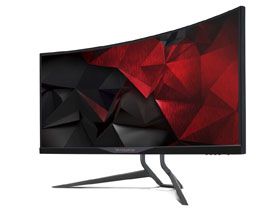 Prices are staying high on ultra-wide panels, which is unfortunate. It really is a cool way to experience gaming and computing in general. If you've already committed to a high-end Nvidia-based rig, the Predator X34 might be just the right way to finish off your build. With high resolution, an IPS panel and other positives, it should stay relevant for the foreseeable future. If you're considering the curve, there isn't much better out there right now.

We've discussed at length what separates gaming monitors from other categories. No longer can a panel manufacturer wrap a 60Hz business-class screen in a zooty-looking chassis with red trim and call it done. It's pretty well established that fast refresh, low input lag, quick panel response and perhaps a few game-specific picture modes are the minimum requirement for a display to truly qualify.

But other elements are now making their way to the top of users' wishlists. Since the advent of G-Sync and FreeSync adaptive refresh technologies, it's pretty hard to imagine playing games without some way to eliminate frame tears. A few years ago, one either lived with the artifact or the additional input lag that comes with V-Sync.

Also making its way up the priority list are resolution and pixel structure. Even though 1920x1080 (FHD) is the standard on most desktops, gamers want at least 2560x1440 (QHD); preferably in a 27-inch size, which is fast becoming the most common form factor in all display categories. With that much screen area, you'll need QHD to render sufficient pixel density to remove jaggies from the image equation.

We've looked at some excellent gaming screens that keep costs down by employing TN panels. But ultimately, the best overall image fidelity comes from IPS. The differences are small but of all the monitors we’ve reviewed, IPS still stands as superior. It also still stands as a premium technology that commands fairly high prices.

Today, we're checking out one such example: Acer's Predator X34. It checks nearly every box with a 100Hz refresh rate, G-Sync, IPS and an ultra-wide 34-inch 21:9 aspect ratio with a 3800R curvature.

This is far from the first curved display reviewed here at Tom's but it seems that with each one, performance gets a little better. Unfortunately prices have remained fixed at around $1000 or even a little higher. At this writing, the Predator X34 is selling for around $1300.

For your hard-earned cash you get a 3440x1440 pixel IPS panel with a flicker-free LED backlight, 10-bit color (courtesy of frame-rate conversion), a claimed 4ms response time, G-Sync, 100Hz refresh (with overclock) and decent built-in speakers that feature DTS tuning. It's a good package for any gamer and it adds to its attractiveness by employing a bright and color-accurate panel part from LG. If the specs look familiar it's because Acer is using the same part found in the XR341CK FreeSync display.

By using G-Sync and upping the max refresh to 100Hz, Acer has tacked on a $200 premium to the price of admission. So right off the bat, if you're an AMD-user, you can save a bit of money by going for the XR341CK. The only thing you'll be giving up is an extra 25Hz. The panel runs at 75Hz natively but the X34 adds an overclock option that lets you tweak up the action in 5Hz increments. Turning up the heat won't void the warranty but Acer doesn't guarantee 100Hz in every case. We had no trouble running at full honk all day long with our GTX Titan-based test system.

We haven't talked much about the curve yet and that subject has been covered at length in past reviews. The X34 uses a slight 3800mm radius that wraps the image around just a bit without introducing visible distortion. It's a neat effect that we like and it seems enough people are buying in to keep the category alive.

The Predator X34 seems to have every necessary qualification to take its place in the gaming category. Does its performance also measure up? Let's take a look.

Next Page Packaging, Physical Layout And Accessories
21 Comments Comment from the forums
Be In the Know