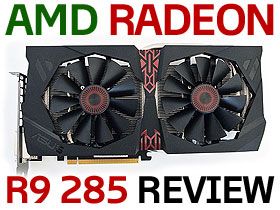 A good $250 replacement for the Radeon R9 280 that doesn't up the ante when it comes to game performance, but adds new features and lower power usage to the mix.

The Radeon's GCN Is Updated Again: The Tonga GPU

When we first heard about the new Radeon R9 285, our first impression was pessimistic. The new Tonga GPU sports specifications that are nearly identical compared to the Radeon R9 280, but with a slightly lower GPU clock and a sizable memory bandwidth deficit thanks to its thinner 256-bit memory interface. While the Radeon R9 285's onboard RAM runs at a higher 1375 MHz clock, the net result is 176 GB/s of memory bandwidth - significantly less than the 240 GB/s memory bandwidth of the R9 280. In addition, the R9 285 has 2 GB of RAM, whereas the R9 280 has 3 GB.

The tale of the tape is not kind to the Radeon R9 285. Yes, the new card's power usage has gone down significantly compared to its predecessor, but from a gaming perspective, that would be small consolation in exchange for lower performance. If raw specifications were all that mattered, and if the Tonga graphics processor was merely a re-spin of the Tahiti GPU in the Radeon R9 280, we wouldn't have a lot of nice things to say about the new Radeon R9 285.

After testing it, though, we were pleasantly surprised to find that the Radeon R9 285 has a few tricks up its sleeve thanks to some re-engineering of the Graphics Core Next (GCN) architecture.

Despite what its specifications may suggest, Tonga is not a spin on the Tahiti GPU in the Radeon R9 280 and 280X. Rather, it is a new and condensed version of the Hawaii GPU in the Radeon R9 290 and 290X. Among other things this means it has four times the number of asynchronous compute engines, that's eight instead of the Radeon R9 280/280X's two. According to AMD this can improve tessellation performance from two to four times, and facilitates effects that rely on GPU compute. In addition, the Radeon R9 285 inherits the 290 series' quad-shader layout, allowing four primitives to be rendered per clock cycle instead of two. Also note the CrossFire XDMA block, which provides the possibility of multi-card operation without a bridge connector.

Speaking of cut-down, we're told that Tonga is slightly handicapped for use in the 285, and that the uncut GPU has the potential to utilize eight compute units per shader engine for a total of 2048 shaders and 128 Texture units. If this sounds familiar, it's because this is the same number of resources available in the Radeon R9 280X. Perhaps AMD has some bigger plans for the Tonga GPU in the future.

Regardless, AMD did scale back some parts of the new GPU. Each of the four shader engines carries two render back-ends - instead of four as per the Radeon R9 290 series. Each of these is capable of rendering four full-color pixels per clock, for a total of 32 pixels per clock cycle in total. This is half of what Hawaii can process but equals the Tahiti GPU in the Radeon 280 and 280X.

Improvements are always welcome but with the memory interface cut by a third compared to the Radeon R9 280, AMD needed to accomplish some magic to compensate for that 27% drop in available bandwidth. The company's solution was to enable the GPU to read and write frame buffer color data in a lossless compressed format, a technique that it claims can deliver 40% higher memory bandwidth efficiency. We're somewhat skeptical that this will completely compensate for the Radeon R9 285's lower available bandwidth compared to the Radeon R9 280, but we'll see what the benchmarks have to say about it.

That's not all that's been improved over the Hawaii GPU in the Radeon 290 series, though. Tonga boasts other new features such as the ability to process instructions in parallel between SIMD lanes, improved compute task scheduling algorithms, and even new 16-bit floating point and integer instructions for compute and media processing tasks.

Of course, Tonga has inherited Hawaii's fixed-function hardware, too, such as TrueAudio (AMD's new audio processor) and project FreeSync (the open-source answer to Nvidia's G-Sync) support. In addition,  AMD claims to have revamped the unified video decoder (UVD) and video coding engine (VCE) with improvements specific to the Tonga GPU. The Radeon R9 285's UVD now supports H.264 playback at high frame rates on 4K displays, and the VCE has been improved with faster performance in addition to 4K resolution support. AMD claims a 31%-47% transcoding advantage over the GeForce GTX 760, but we'd prefer to run our own tests on that so expect some in-depth coverage from us in the future.

For the first time, AMD has added the ability to specify the maximum fan speed in the Overdrive overclocking utility. This means that users who prioritize noise can set the maximum fan RPMs, and the driver will automatically adjust clock rates to fit power and heat into the user-specified envelope. This feature will be available in the 14.8 release driver, but only to models with second- and third-iterations of GCN processors: the Radeon R7 260, 260X, R9 285, R9 290, and R9 290X. This functionality didn't seem to work in our pre-release beta driver, unfortunately.

Those are the updated details we have to share from an architectural perspective, now let's get down to the nitty gritty: the test hardware, specifically the Radeon R9 285 card.