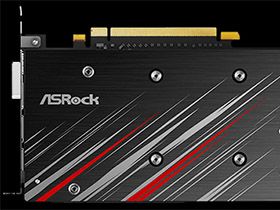 We poked around to see if ASRock’s customers were having the same noise issues as us and noticed that the company recommends its Phantom Gaming Tweak software to enthusiasts looking for a quieter experience.

The utility is simple, well-organized, and informative. It gives you the option of choosing between four different operating modes: OC Mode, Default, Silent Mode, and User Mode.

In OC Mode, the Phantom Gaming X Radeon RX590 held a steady 1591 MHz in FurMark. However, it took an astronomical 3400 RPM to keep its GPU at 78°C. Before you start overclocking a graphics processor that began life in the Radeon RX 480, was reborn as Radeon RX 580, and was tweaked again to become Radeon RX 590, understand that extracting additional headroom is going to be a battle.

Default mode offers a better balance. The clock rate under FurMark drops to 1426 MHz, but we record a lower 75°C GPU temperature while the fans spin at a more conservative 2930 RPM. The card’s actual target in this mode is 1560 MHz (31 MHz less than the OC mode target), so non-constrained games would yield better performance.

Dropping to Silent mode has a big impact on noise, slowing the fans to 2410 RPM. ASRock’s card shoots for a 1528 MHz target, but only achieves 1083 MHz at 67°C in FurMark. A hotter GPU would necessitate faster-spinning fans and that’d defeat the purpose of such a mode altogether.

User Mode opens up all of the knobs and dials, allowing you to try your hand at optimizing beyond what ASRock’s team could achieve. Core/memory clock rates, voltages, power limits, temperature limits, and fan curve settings are all adjustable. By dragging points around the Fan Tuning line chart, we were able to keep the card’s fans spinning (they switch on above 25% duty cycle) and ramp up more smoothly. But there’s no getting around the fact that taxing workloads require lots of airflow to maintain performance. Tweak the fans to reduce noise and you’ll end up with hotter temperatures, necessitating lower voltages and clock rates. Shoot for the moon on overclocking and don’t be surprised when a noisy card gets even louder.

Prev Page Temperatures, Clock Rates, and Fan Speeds Next Page Conclusion
Be In the Know