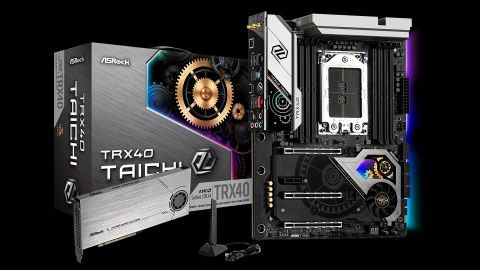 Meet the new boss. With eventually up to twice as many CPU cores serving 64-lanes of PCIe at bandwidth-bumping Gen4 speed makes the new third-gen Ryzen Threadripper an HEDT platform that Intel simply can’t match. Oh, there are a few specific applications where Intel can win, but most of those are already over-served by the CPU (do you really need 200 fps?) or rely heavily on Intel’s architectural specifics (there must be a reason its AVX 512 eats so much power).

For those who need a multithreaded CPU to do CPU-things across a high number of threads, and a platform that can provide high bandwidth to a slew of devices, you should be looking to AMD. Because Intel’s still stuck with fewer cores, fewer lanes, and slower PCIe Gen3. Also, Intel hasn’t yet integrated USB3 Gen2 into its aging HEDT platform, let alone prepared it for the bandwidth voraciousness of a PCIe 4.0 SSD.

AMD’s diagram above shows an additional 28 PCIe 4.0 lanes for the TRX40 chipset, but the diagram itself doesn’t indicate which features can be converted to other features. Everything connected to the chipset is limited to the bandwidth of the 8-lane CPU-to-chipset interface. So we’re certain that most boards will maximize deployment of the CPU’s onboard controller first.

Assuming every interface in the chart is fixed leaves us looking at only one specific oddity: There’s no integrated audio controller. Yet before you discrete-card types run off to celebrate, we’d like to note that every board we’ve seen so far has used a Realtek ALC4050H USB-base controller—as shown in the diagram—to drive the familiar ALC1220 codec.

For its part, ASRock prepared its TRX40 Taichi for today’s launch with an enormous dual-fan heatsink covering its sixteen 90A voltage regulator phases, its 55mm height butting up against the motherboard’s top edge is certain to make a few builders cry for not having considered radiator fan to motherboard overlap in their purchase. So it’s designed for a heavy power load, but what else does this board have to offer.

It’s nice to see a 20Gbps Type-C connector (USB 3.2 Gen 2x2) on the I/O panel, even if it does require an extra controller. The IO Panel also has two 10Gbps and four 5Gbps USB ports, a 2.5GbE port, in addition to Gigabit Ethernet, antenna connectors for its onboard Intel AX200 2.4Gb/s Wi-Fi controller, a BIOS Flash button to get the system moving even if a yet-undocumented future-model CPU is used, a PS/2 port, five audio jacks, and a digital optical audio output with DTS Connect support. We have but one complaint: As with ASRock’s old boards, the antenna jacks are not supported by a bracket but are instead bolted directly to the somewhat-flimsy I/O shield. Worse, they must be unbolted from that shield in order to remove the clear plastic protective shield that the board ships with, and then bolted back in place.

Zooming out, we find a larger (50mm) chipset fan than typically seen on AMD’s X570 boards, which benefits the user by being able to spin far more slowly at far quieter noise levels. Inaudible during operation, its screaming maximum speed is only heard for a few seconds at bootup. Hopefully that can be minimized in a future firmware update.

Also above, we can see the seam where the lower M.2 heatsink splits from the upper PCH sink shroud, which integrates the upper M.2 cover. The means that the lower M.2 slot is far easier to access than the upper one.

Since two M.2 drives aren’t enough to satisfy the HEDT market, the TRX40 Taichi also includes ASRock’s “Hyper Quad M.2” four-drive adapter. Permanently wiring it as x16 allows ASRock to produce these without any PCIe switches at incredible cost savings, which is fine since the company is including it with a board that has fully-populated pathways on all three x16 slots. Total possible NVMe 4.0 drive count jumps to six with the card installed.

Two 40mm, 7600 RPM fans cool the voltage regulator, but even our heartiest overclocking and stress testing efforts never forced them break past a quiet 2400 RPM. If you’re wondering how speeds over 2000 RPM can be quiet, remember how small these spinners are.

This common design concession means that ASRock couldn’t put two empty spaces between each of its x16 slots. And that means that users who want to run two triple-slot-thickness graphics cards along with the M.2 expander card will need to find a case with at least nine slots in standard orientation, which we haven’t seen in a while.

We’d have been tempted to move the third slot up a space, but restricting the second x16 slot to single-space cards such as the included M.2 riser would have eliminated the familiar three-way graphics layout. That said, multi-GPU machines are becoming increasingly niche in the consumer space. If you're building a workstation you plan to load up with beefy GPUs, just be aware of the layout here and plan your cards accordingly.

Removing the M.2 covers reveals three M.2 slots, if we count the Key-E slot that’s factory filled with Intel’s AX200 Wi-Fi module.  In front of the top M.2 cover / fan shroud, six of the board’s eight SATA ports are bounded by two forward-facing USB 3.0 dual-port front-panel connectors, and south of those is a CLR_CMOS button.

The giant voltage regulator heatsink is partially supported by a black anodized-aluminum backplate, which loses much of its function once the board is screwed down tightly to a rigid chassis. That plate is sill handy for reviewers who like to plop a board down on a desk or table, and of course it looks cool. Furthermore, the plate encapsulates the plastic RGB LED lighting diffuser at the board’s front edge, reducing the bright spots that would otherwise be seen in an open-frame type chassis.

The TRX40 Taichi installation kit is a little sparse beyond its inclusion of a four-drive M.2 adapter card. We find a manual and software guide, a driver/application disc, Wi-Fi antenna, Torx-head driver for M.2 covers, four SATA cables, a case badge, and several screws.

Next Page Software, Firmware And Overclocking
No comments yet Comment from the forums
Be In the Know