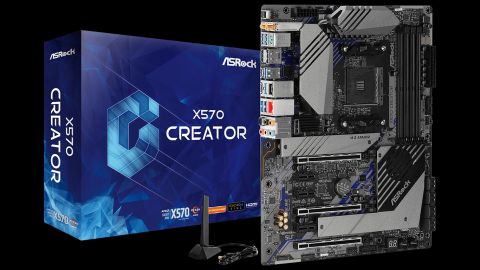 We played around with ASRock’s A-Tuning long enough to determine that it at least controls our CPU clocks, though its System Info page shows Ryzen Master’s CPU temperature reading as “SB TSI CPU”.

The X570 Creator has no onboard lighting, so its Polychrome Sync app only works for RGB headers and compatible DRAM. Though changes were laggy with our memory, it did eventually work.

The tested version of X570 Creator firmware doesn’t have an easy-mode GUI, but its advanced mode is simple to navigate. Its OC Tweaker menu is of particular interest to us, since it includes everything we need to push our low-risk overclocks.

Attempting an all-core overclock means living with the maximum frequency of the worst core, which in our case isn’t very high. As with most boards, attempts to go beyond 4.2 GHz were unsuccessful even at far-higher voltage levels, so we reverted to safe settings.

Ryzen 3000 processors are famed for their memory overclocks but also known for needing sub-optimal memory controller and Infinity Fabric ratios to reach these. Users who don’t want to exceed AMD’s default DDR4-3600 limit for those ratios may instead choose to chase memory performance via optimized timings, for which the X570 Creator includes the full set of controls.

The X570 Creator doesn’t have onboard RGB lighting, and anyone who doesn’t want to install ASRock’s RGB application for Windows can control compatible RGB accessories via the board’s external RGB headers via firmware.

ASRock left the fan mapping graphic out of X570 Creator firmware, but the corresponding numeric values are still there for those who’d rather not use the included software. The default map for the southbridge fan kept it running at 3700 to 5000 RPM, its noise minimized only by its small size.

The X570 Aqua reached DDR4-4000 with all four DIMMs installed, while the X570 Creator only reached DDR4-3800. The Creator still beat the X570-E Gaming and X570 Taichi, but that’s probably due to its newer firmware. It also beats those two boards, and only those two boards, in CPU overclocking, if by a scant 25 MHz.

We overclock to gain performance, but the X570 Creator had the third-worst overclocked memory bandwidth. The slower (data rate) boards were faster (more bandwidth), but we should note that settings over DDR4-3600 can hurt performance due to firmware automatically decoupling the CPU’s Infinity Fabric clock at higher frequencies. This can be overcome via manual overclocking, but typically not at data rates this high.