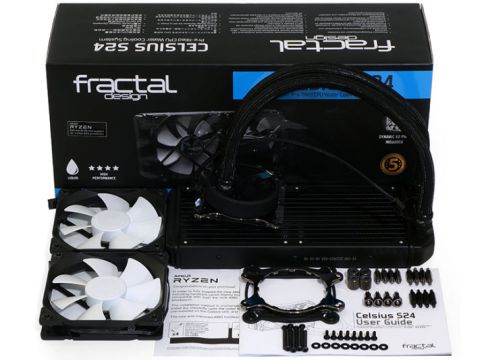 The best performing CPU cooler we’ve tested in two years, the Celsius S24’s low flow ratings prevent us from recommending it to the expandable kit market without further testing. Superb performance instead earns the Celsius S24 our general stamp of approval for those who only intend to use it as delivered.

The liquid CPU cooling market has typically been divided into low-cost/closed-loop and high-priced/open-loop configurations, but manufacturers have attempted to bring forward products that were supposed to combine the best of both worlds over the past few years. Buyers of factory-filled open loops have been able get all the convenience of a leak-free factory assembly plus the option to open it later to add components. Yet there was never a best-of-both-worlds compromise on price, because those factory-filled loops deployed premium-priced components.

Fractal Design presents potential solutions in its 2x 120mm Celsius S24 and 3x 120mm Celsius S36 kits. We got our hands on the two-fan version in time for a launch-day review.

The first thing you’ll notice in the specs is that the radiator size is just that: the size of the radiator. Unlike most pre-filled open loops, the Celsius S24 doesn’t have its pump mounted there. Instead, we find a slightly oversized version of the water-block mounted pump familiar to the closed-loop market.

The radiator and pump are still equipped with standard G1/4 fittings to allow reconfiguration, just like competing solutions. And while the Celsius S24 doesn’t include extra fittings, it does include all the hardware needed to fit it to Intel’s three most recent generations of square-ILM sockets, AMD’s legacy rectangular-pattern sockets, and the new differently-spaced AMD socket AM4 mount. AMD users will need to remove the motherboard’s clip bracket, of course.

The Intel bracket is factory installed using a twist-connect design with locking tabs. Noticing that LGA 2011, 2011-v3, and 1366 all use the same spacing, Fractal Design even included a set of holes on its CPU support plate for LGA 1366. LGA 2011 and 2011-v3 have an integrated support plate.

The AMD bracket also uses AMD’s stock support plate, though “stock” is a loose term given that multiple designs have emerged. The support plates of most legacy boards have used standardized screws for many years, though earlier designs often used alternative attachment methods where the focus was on the clip rather than the bracket that held it. Even today, some AM4 support brackets have a threaded collar that extends past the motherboard’s top surface, while others don’t.

Fractal Design’s workaround for differing threaded collar heights is to include a special set of standoffs with stops that go around the collar and bottom against the board. These are polished, so they won’t scratch through the board’s protective mask and short any circuits. If you’re still more concerned about touching your delicate motherboard than mounting height, you’re free to use the traditional hardware that’s also included.

The Celsius S24 is powered at the pump, yet its braided sleeve perfectly conceals any hint of the embedded cable that runs from the pump to a breakout header for its fans. Pump speed can be regulated either by the motherboard’s PWM signal or via an internal temperature-based controller, and the pump relays its speed control to the fans. The above close-up also shows two of the four G1/4 fittings in greater detail.

Fractal Design’s Dynamic X2 GP-12 PWM fans are rated at 500-2000 RPM and a maximum 32.2 decibel (A-weighted). Fractal Design’s literature doesn’t mention the implication of a maximum of 35.2 for the pair, since doubling the number of sound sources adds 3db to a measurement.

Next Page Installation, Evaluation & Conclusion
34 Comments Comment from the forums
Be In the Know