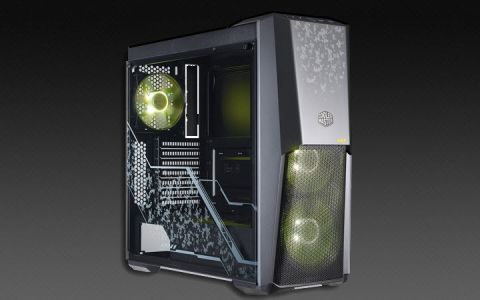 The interior of the chassis is painted black, and is the only area that does not employ Asus' TUF Gaming digital camouflage styling. The layout is very clean and spacious, given the smaller than average exterior. Two cable pass-through holes with rolled metal edges live to the right of the motherboard area, and two are found in the top of the power supply shroud. This chassis can be equipped with coolers as tall as 160mm, and can accommodate multiple graphics cards up to 400mm (15.7 incehs) in length.

Like many cases on the market today, the MB500 TUF features a large non-removable PSU tunnel at the bottom of the main compartment; it covers the power supply and two drive bays. The PSU tunnel in this chassis differs from the standard MB500, as it has a window cut in the side that allows you to see your PSU. Presumably this cutout is to highlight the TUF Gaming Edition power supplies offered by Cooler Master. This area, including the hard drive mounting locations, receives direct airflow via the bottom-most 120mm intake fan.

The case has mounting locations for a total of two 3.5” hard drives and four 2.5” drives, two of which are converted from the two 3.5" drive trays mounted under the PSU tunnel. Of the four dedicated mounting locations for 2.5" drive caddies, two are located on the motherboard tray and two are mounted to the outside of the PSU tunnel. The case only includes two 2.5” drive caddies, so not all locations can be populated at once.

Cooling duties are handled by dual 120mm front intake fans, feeding a 120mm exhaust fan behind the CPU socket area. All fans in this chassis are LED-lit RGB style fans that can be controlled via the included RGB controller. The sheer amount of airflow provided by the intake fans should provide more than enough cool outside air to keep even the most demanding system configurations cool. The intake fans can also be adjusted up or down to tailor the airflow to your particular components and placement.

The LED-lit RGB fans included with this chassis can be connected to a built-in RGB controller if your motherboard does not feature RGB functionality. For those with RGB-capable motherboards, the lighting is also compatible, via an included RGB fan / power cable, with MSI's Mystic Light, Asus' Aura Sync, Asrock Polycrome and Gigabyte's RGB Fusion lighting software.

Radiators and all-in-one coolers can be mounted in the top, front, and rear of this chassis. The mounting locations in the front of the chassis support up to 360mm radiators. As with other mid-tower ATX chassis of similar design, like the Corsair Carbide 275R and NZXT H700i, installation of 360mm radiators and all-in-one coolers in the front mounting locations can be a bit tricky. We found it easiest to place the radiator in first, slide the bottom fan in place between the radiator and frame, and then run the bolts through the holes behind the front fascia, followed by the middle and uppermost fan. Top panel radiator installation can be even trickier, since there's only 1.6" of vertical clearance for both the radiator and fans.

Top panel mounting locations are spaced horizontally away from the motherboard, so that at least a few motherboard and memory configurations should fit behind a top-panel radiator and fan set.

The specifications listed on Cooler Master's website state that this chassis can only accommodate power supplies up to 180mm in length. During testing, we were able to fit a 220mm PSU, though it was a tight fit. If you choose to install a long power supply, we highly recommend using a modular unit.