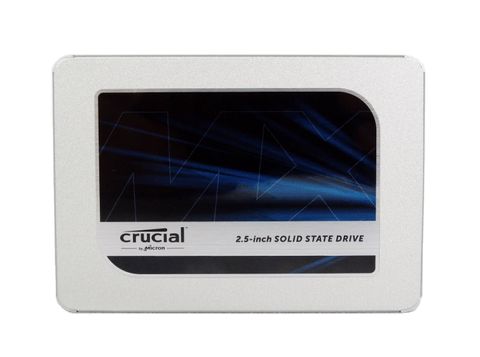 We have the Crucial MX500 1TB in for testing. We expect the other capacities to arrive in the coming weeks. We've brought in two previous-gen 1TB-class products from Crucial to use as comparison points. The first is the outgoing MX300 with first-gen Micron 3D NAND. Crucial didn't release a 1TB-class BX300, so we reached back to the BX200, a very popular model for budget builds in 2015 and most of 2016.

The Samsung 850 EVO 1TB is both the performance leader and the bestselling SSD of all time. We're testing the newest 850 EVO with 48-layer V-NAND. Samsung shipped 850 EVO products in both 32-layer and 48-layer flavors, but the latter is slightly faster in many workloads. Crucial hopes the MX500 can break into EVO-class performance, but at a substantially lower price.

The Corsair Neutron XTi, SanDisk Ultra 3D, Toshiba VX500, and WD Blue 3D all join the comparison group. The Ultra 3D and Blue 3D are nearly identical barring any price differences due to the target market. They compare well to the 850 EVO's performance and often sell at a lower price.

This is our first review with new synthetic workloads that we designed specifically to measure pure burst performance. This helps to isolate the fastest portion of the SLC buffer in write tests and also combats thermal throttling. Most consumer workloads are bursty by nature. The new synthetic workloads give us an accurate look at what most users will see during normal use. We still measure sustained write performance in some of our carryover tests.

To read about our storage tests in depth, please check out How We Test HDDs And SSDs. We cover four-corner testing on page six of our How We Test guide.

We've hit a brick wall in basic workload performance courtesy of the SATA bus. Sequential reads are the easiest of the basic four-corner tests (sequential read/write, random read/write) and most of the drives saturate the SATA interface.

The sequential write tests find most of the drives grouped at higher queue depths (QD). We find a bit more variation in this test at the all-important lower QD, but most of us will not see a meaningful difference moving just a few files that fit within the SLC layer.

Crucial made several meaningful changes to the new 64-layer NAND and controller firmware. The net result is a significant improvement in sustained write performance. The MX500 1TB has native TLC sequential write throughput of roughly 400 MB/s.

The MX500 breaks our previous random read QD1 performance record for SATA with a blistering 12,000 IOPS measurement. This is in part due to our new test methodology, but the MX500 also surpasses 10,000 IOPS in our older tests and is slightly faster than the 850 EVO.

This is the most meaningful measurement that carries over to your user experience, so this is an important win for Crucial.

The Crucial MX500 1TB falls in the middle of our 4KB random write test at low queue depths. To a large extent, SSDs provide more random write performance than most of us can use. The SLC buffer does a very good job of absorbing this incoming data with very low latency. Slight improvements here often don't carry over to the user experience if the drive doesn't experience excessive performance loss during sustained write workloads.

Mixed workloads are better for measuring real-world performance. Your PC is constantly reading and writing data at the same time due to ever-present background activity. SATA is only capable of reading or writing data at once; the protocol doesn't allow both actions to happen at the same time. Native command queuing allows the drives to stack commands and even reorder the processes to make the events more efficient.

The MX500 takes second place behind the Toshiba VX500 in the important QD2 measurement.

The MX500 1TB performs very well in both mixed workload tests, but it raises the bar with random data. This comes from the MX500's very high random read performance, which easily beats the previous-gen MX300. The new firmware for the SM2258 controller and the new 64-layer flash get credit for the turnaround.

Micron's TLC NAND is only slightly more consistent compared to the first generation, but it does deliver higher performance. The new SSD provides 9,000 random read IOPS, which is a big jump over the MX300's 7,000 IOPS.

The MX500 closes the wide gap we measured between the Samsung 850 EVO and the MX300. The 850 EVO is the target for every consumer SSD vendor, but catching the beast is more difficult than many predicted.

The Toshiba VX500 1TB provides slightly better application bandwidth than the MX500, but it has an issue with pricing (currently $369.99). Crucial's pricing gives the MX500 an advantage in this capacity.

The Crucial MX500 1TB trailed the 850 EVO slightly during very light conditions in the previous series of tests. The gap widens after a heavy workload. We focus on the recovery stages in this series. These stages provide five-minute idle periods that allow the drives to recover partially. The MX500 doesn't recover as well as the EVO, but that doesn't tell the entire story. All consumer and enterprise SSDs are moving to TLC NAND, so the race is on to find suitable products for heavier workloads. The MX500 outperforms the EVO during the steady state stages of the test, proving it's a contender.

The service time results show us that Crucial has made the right changes to get back into the performance SSD market. The BX200 and MX300 suffered nearly debilitating latency during heavy use. The new MX500 solves the latency problem that came to a head with Micron's 16nm planar TLC and first-gen 3D TLC NAND.

The disk busy time tests measure how long the drives were active during the workload. We can see how far Crucial got off track over the last few years and how the new MX500 with 64-layer NAND brings the company back into competition.

Responsiveness is another way of measuring the user experience. In this test, we get our first and only look at the Crucial MX500 with the RAM-caching Momentum Cache software.

The MX500 is close enough to the Samsung 850 EVO that you will not be able to tell the difference during a typical office workload. Momentum Cache closes the gap even more, but it's less effective than we hoped. Enabling the system memory to cache storage IO also increases power consumption (DRAM uses more power than NAND). Increasing the amount of DRAM activity consumes more power even when the same amount of data passes through the system.

The MX500 is not the best product for notebook users searching for long battery life. Crucial's latest trails all of the other drives during the battery life test. We often see inverse power/performance results when a drive consumes more power. The power must go somewhere, and it's often used to provide superior performance under the restricted bus conditions. That wasn't the case with the MX500.

We suspect Crucial's Dynamic Write Acceleration algorithms may play a role in our power consumption results. Even when the cache is full, data still passes through the SLC and then fold back into the TLC NAND. This process adds to the amount of background activity, which consumes power. Crucial is also using new flash management techniques that could play a role in the results.