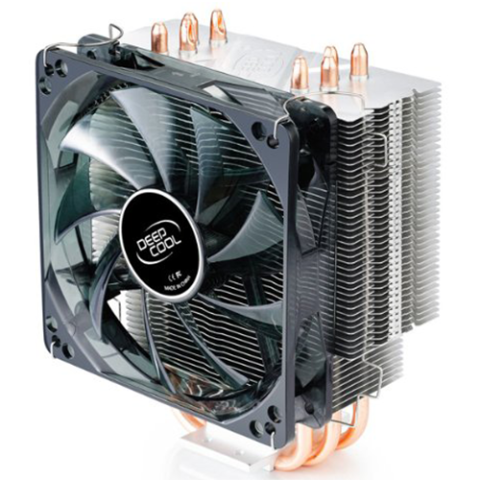 By a wide margin, Deepcool's Gammaxx 400 has the best performance-to-price ratio of any cooler I've recently tested. It will remain on the top of my purchase list until something with even greater value comes along to replace it.

Deepcool has shipped us several great-performing reasonably-priced products over the past few years, with its Gamer Storm Assassin II dual-tower cooler recently beating most of the firm's competitors in both price and performance. Can the company do more with even less?

The Gammaxx 400 loses both the Gamer Storm label and a second cooling tower compared to that high end model, but gains a cleaner airflow pathway and broader compatibility with systems that have tall memory modules. Cooler thickness is the most-important factor in determining whether a CPU cooler must sit above or behind that memory, and the Gammaxx specifications are fairly close to those of other recently-tested slim tower coolers.

Compared to the NH-U12S, Deepcool's Gammaxx 400 hangs an extra 0.1" of fins off both the front and rear of the CPU socket. As a frugal builder, I can sympathize with anyone who actually needs the extra 0.1" of memory clearance afforded by the costlier part. The Gammaxx 400 is also a little wider, though about half that difference comes from its wire fan retainers sticking out farther. All three coolers come with an extra set of clips to hold a second fan in push-pull orientation.

Four screws secure mounting brackets to the side of the Gammaxx 400's base. The installation kit includes an AMD bracket for a motherboard's stock clip-on retainer (oriented with clips at the sides), a universal square-ILM bracket with "push pin" locks for Intel's LGAs up to 1366, and a similarly slotted bracket with spring-assisted LGA 2011x screws. Adjustment slots are meaningless with screws that are specific to LGA 2011x, and installers must remember to slide these screws all the way to the outer edge of those slots to match their motherboard's threaded retainer holes.

The Gammaxx 400 has perhaps the smoothest direct-contact heat pipe base I've ever felt. Best cooling results can usually be found by filling the gaps next to the pipes with thermal paste, yet I was barely able to squeeze any into these spaces.

The Gammaxx 400 fits well behind the closest memory slots of our test board, allowing memory far taller than the 1.6" clearance height of its side fins. The fan can also be moved up and down on the heat sink, though doing so increases the required amount of over-cooler clearance while reducing the fan's effect on motherboard component cooling.