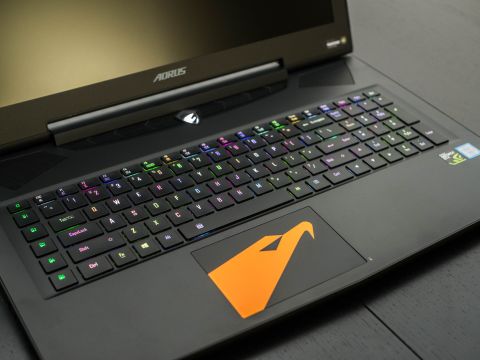 The Aorus X7 DT v7 is outfitted with an overclockable Intel Core i7-7820HK and a power-hungry Nvidia GeForce GTX 1080, so we didn’t expect extensive battery life from it. However, the X7 far exceeded our expectations. When restricted to 30 FPS and 200 nits of brightness, the laptop can deliver nearly two hours of uninterrupted play time, which is unheard of (in our experience) in laptops with such demanding components.

Comparatively, the Eurocom Tornado F5 fares much worse, especially considering that it uses a desktop i7-7700K. Similarly, the MSI GT73VR Titan SLI falls behind the Aorus by about 20 minutes, even with SLI disabled. This is because these two laptops use smaller capacity 75.24Wh batteries, whereas our Aorus has a massive 94.24Wh battery. With the size of the Tornado and Titan, you would expect their manufacturers to provide a larger battery. Meanwhile, the Asus ROG Zephyrus draws less power thanks to its Max-Q GTX 1080, but it also has an even smaller 50Wh battery.

The X7 exhibits warmer idle temperatures than we usually see, with temperatures hovering in the mid to high 40s. However, the fan speed ramps up during gaming and graphically intensive workloads, and after 15 minutes of Furmark stress testing, the GPU temperatures reach around 75° C. Our GPU-Z thermal log corroborates with these temperatures, showing the laptop averaging 73.8°C and reaching a max temperature of 75°C. The X7 is by no means the coolest system out of the pack—the MSI and Eurocom run much cooler, but are also significantly thicker. The Asus produces a higher maximum temperature, but it’s also much thinner.

We used the SpectraCal C6 Colorimeter to measure the Aorus X7 DT v7's display. We tested the X7 on its default X-Rite Pantone Color calibration. Be sure to check out our Display Testing Explained article for a full description of our test methodology.

The X7’s display has lackluster contrast levels, which is to be expected from a TN panel. At minimum brightness, it has a good black luminance of 0.284, but a low white luminance of 18.9935, resulting in a flat contrast ratio of 668.2:1. Conversely, the white luminance at maximum brightness is a bright 387.4615 nits, but the black luminance is also high at 0.5817 nits, resulting in a contrast ratio of 666.1:1. Its competitors produce much better contrasts because of their IPS panels.

The TN panel’s lackluster contrast values left us expecting similar performance throughout the rest of our display testing. However, we were pleasantly surprised with the Aorus results, starting with RGB balance levels. Green levels are slightly higher than need be, while reds are a tad low, but the scenario switches at maximum brightness. For the most part, RGB levels are balanced.

This brings us to grayscale errors, or rather the lack of errors. The well-balanced display creates a color accurate tint throughout all brightness levels. DeltaE 2000 scores of 3 or lower are indistinguishable, and not once did the grayscale accuracy rise higher than 3. This results in an impressively low average grayscale DeltaE 2000 of 1.5475.

The X7’s display also produces an average gamma of 2.2468, which is close to a balanced saturation point of 2.2. However, the gamma point chart illustrates the gamma fluctuating below 2.2 from 0% to 20% brightness, and rising above 2.2 from 20% to maximum brightness. You’ll experience a bit of under-saturation at low brightness levels and some over-saturation and higher levels, but honestly these numbers are pretty tight compared to others we've seen.

Like grayscale accuracy, overall color accuracy is measured in DeltaE 2000, with values higher than 3 starting to get perceptible. The Aorus has the most color accurate display among the competition, with a DeltaE 2000 of 3.0227. At this level, any color errors are hardly bothersome. In particular, you’ll find errors in blues and magentas at higher brightness settings.