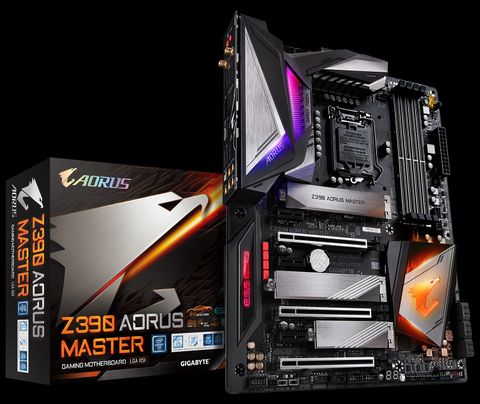 Gigabyte’s Z390 Aorus Gaming Master has the features and CPU overclocking to warrant being on a high-end buyer’s Core i9-companion short list. But we’ll need to see more competing products before we can make specific recommendations.

Gigabyte’s Z390 Aorus Master replaces its previous-generation Z370 Aorus Gaming 7 in the high-end mainstream platform market, with an array of new features that closely match those of the older board. Buyers get a product designed to support eight-core processors, where the older model supported six. But the increased price has us triple-checking our bank balances and bills before we’ll consider plunking down the $290 asking price.

It may have the proper feature set to be the market replacement for its Aorus Gaming 7, but the Z390 Aorus Master’s optimizations for hotter hardware are easily visible from the promotional image: A stacked-fin heat sink replaces the machined design to increase cooling surface area over a larger 14-phase voltage regulator, and the two M.2 slots that normally reside beneath graphics cards now have heat spreaders.

A closer look at the I/O panel shows other conspicuous changes: Even though there’s less empty space, some of that space has been filled with power and Clear CMOS buttons. The Z370 version’s second Gigabit Ethernet port has been replaced with two Wi-Fi antenna jacks that are fed by Intel’s 1.73Gb/s integrated CNVi network hardware. The older board’s PS/2 jack has been replaced with two USB 2.0 ports, and even though the total number of Gen2 USB 3.1 ports has been doubled (to four), the total number of USB three-point-anything ports is down by one jack, from seven to six. In the USB total, buyers lose one 5Gb/s port, get two 5Gb/s ports upgraded to 10Gb/s, and gain four USB 2.0 ports. Whether that’s good or bad could depend upon whether you have more than just a keyboard and mouse to fill those USB 2.0 ports.

DisplayPort has also been removed, which may be excusable for most enthusiasts since they rarely use integrated graphics. But there's no DVI here either, only HDMI. So those who use a monitor for diagnostics may have to buy an adapter, or just plug into any recent flat-panel TV.

Most of the generational changes to the I/O panel can be credited or blamed to the Z390 chipset, which by integrating USB 3.1 Gen2 without any additional HSIO pathways has given Gigabyte the opportunity to substitute direct connections for the previous board’s multiport PCIe-based controllers. The integrated CNVi interface gave Gigabyte the opportunity to swap in ultra-fast Wi-Fi on the cheap, and users who plug in via Ethernet can still use it as an access point for other devices.

The lower half of the Z390 Aorus Master follows the theme of its predecessor, offering three PCIe 3.0 M.2 slots (two with SATA compatibility), and three x16-length slots that operate in either x16-x0-x4 or x8/x8/x4 mode, with the third slot sharing the PCH’s limited bandwidth with storage, networking, USB and three x1 slots. We see two fewer audio capacitors above the front-panel connector versus the Z370 model. We still get an ESS Sabre DAC, but this time it’s a 9118 (with integrated headphone amplifier) rather than the famed 9018 (which required a separate headphone amplifier).

The front-panel USB 3.1 Gen2 header has been moved to a spot between the PCH heat sink and the DIMM slots, where its cable could hinder opening the second slot’s lower latch, but that cable is easy to get out of the way. Gigabyte adds firmware IC selector and dual-BIOS-mode switches to the bottom edge, while keeping the digital LED, RGB, dual USB 2.0 headers, Port 80 code display, and triple fan headers from the previous board. The internal reset button, which was located at the top corner of its predecessor, now resides between the Port 80 display and trio of fan headers.

With the power and CLR_CMOS onboard buttons moved to the I/O panel, only Gigabyte’s OC button remains in the top-front corner--that's the right front corner when the board’s turned sideways as in the image above. Another Digital LED and RGB LED connector pair live next to the OC button, and a row of voltage check points (VCCIO, VAXG, VSA, VCRORE, DDRVTT, PCHIO, VPP_25V, VDIMM) are located between the DIMM slots and the top edge.

Those of you paying close attention may have noticed that the Z390 Aorus Master has many fan headers (eight) and two black screws. The screws hold the forward edge of the board’s steel back shield which, along with the metal-reinforced slots, are supposed to help the board survive the occasional rough handling that may occur when transporting a gaming rig between events.

The Z390 Aorus Master includes documentation, a driver and application disc, four SATA cables, and an SLI bridge. Also in the box: two digital LED adapters and one RGB extension cable, two thermistor leads, two Velcro cable ties, a Wi-Fi antenna, a G-Connector cable bundler for the front-panel button/LED group, and a sheet of stickers. As boxed accessories go, it's a substantial collection, but in line with what we would expect from a board in this price range.