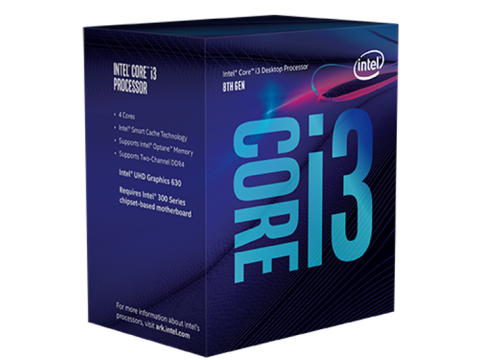 The Core i3-8100 performs well through our Adobe suite, taking fourth place overall. It beats the Ryzen processors in every test except for the After Effects sub-test, where AMD's unlocked multipliers help swing the advantage in Ryzen 5's direction.

The Krakken suite tests JavaScript performance using several workloads, including audio, imaging, and cryptography. Intel's Core i3-8100 nudges ahead of the -7100 by a slim margin.

The MotionMark benchmarks, which focus on testing the graphics subsystem rather than JavaScript performance, are very sensitive to clock rate. That lends the previous-generation Core i3-7100 an upper hand over the -8100.

The application start-up metric measures load-time snappiness in word processors, GIMP, and Web browsers, under warm- and cold-start conditions. Core i3-7100 once again beats the Core i3-8100 due to its higher frequency ceiling. We also see impressive performance enabled by the -8400's top Turbo Boost bin.

Video conferencing measures performance in single- and multi-user applications that utilize the Windows Media Foundation for video playback and encoding. It also performs facial detection during the workload to model real-world usage. This task responds well to extra threads, allows the Ryzen 5 1500X to shine. The Core i3-8100 offers solid performance for its price, and it ekes out a win over the competing Ryzen 3 models.

The photo editing benchmark measures performance with Futuremark's binaries that use the ImageMagick library. Common photo processing workloads also tend to be parallelized, so we see a lot of the same behaviors. The overclocked Ryzen 3 1300X beats Intel's Core i3-8100, and the heftier Ryzen 5 models also perform well. Clock rates play a pivotal role in determining performance, too, as the quad-core Core i3-8350K bests a six-core Core i5-8400.

Prev Page Project CARS, Far Cry Primal & Rise of the Tomb Raider Next Page Rendering, Encoding & Compression
48 Comments Comment from the forums
Be In the Know