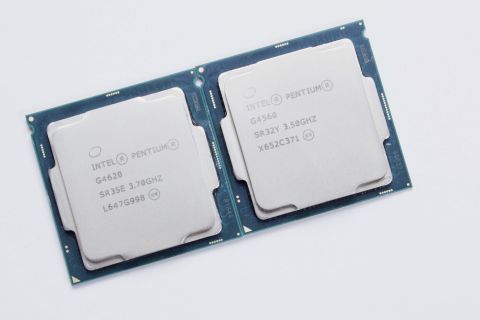 Budget gaming builds always strive to optimize for performance per dollar. The Pentium G4560 stacks that equation in your favor like no processor before it. A slightly lower clock rate compared to the G4620 saves quite a bit of money, yet it's still fast enough for modern games and most desktop productivity apps. If a discrete graphics card is on your shopping list, the Pentium G4560's low cost might help you level-up to a faster GPU, too.

Enthusiasts and casual users alike have suffered from the slow trickle of CPU innovation over the last several years. Each new generation brings smaller improvements, and lately, stagnant pricing. Intel's 14nm Kaby Lake architecture, which marks the company's transition to an extended tick-tock-tock cadence, sets the stage for even less excitement from each generation. We appreciate faster transistors that provide higher clock rates, along with Intel's improved media capabilities, but the rewarmed Skylake design won't inspire anyone with a fairly modern PC to upgrade.

Although the high-end processors give us little to talk about, Intel's recent realignment of the Core i3 and Pentium families are a bit more newsworthy. First, the company launched an unlocked Core i3-7350K, and though it doesn't offer the value we expect from an i3, it is a fun chip for tuners.

Intel also infused the Kaby Lake-based Pentiums with 100-200 MHz of extra frequency. More important, they now enjoy the benefit of Hyper-Threading technology. In the past, Hyper-Threading was a key differentiator between the Core i3 and Pentium CPUs, but the dual-core chip's ability to operate on four threads simultaneously could put today's Pentiums on-par with some of yesterday's low-end Core i3s. Hyper-Threading can boost performance up to 30%, and though we usually see ~20% gains in applications optimized for parallelization (mileage varies, of course), this move also opens the door to games that require four threads.

Kaby Lake Pentiums still include 3MB of last-level cache shared across the die, which is another differentiating feature compared to the 4MB-equipped Core i3s. Thankfully, the Pentiums do include a heat sink, which will help value-seekers keep costs down.

The 51W Pentium G4620 is the family's highest-end model. Its 3.7 GHz base frequency is only 100 MHz higher than the previous-gen G4520. As with all Pentiums, Turbo Boost is not supported. The chip does feature HD Graphics 630, though, and the Gen 9.5 graphics architecture provides fixed-function hardware for HEVC 10-bit decode/encode, VP9 8/10-bit decode, and VP9 8-bit encode. The G4620 offers promising performance, but its $93 price tag comes uncomfortably close to the Core i3 series.

Intel did make a few adjustments to prevent the Pentiums from plundering sales of its own more expensive models. The company nixed support for AVX/AVX2 instructions and TSX-NI, though we don't expect those omissions to hurt low-cost gaming machines much. It also trimmed Optane support, which is one of the few reasons to upgrade to a 200-series motherboard. We don't know what price Intel's Optane caching will command when it comes to market later this year, but we're fairly confident that the technology won't be aimed at entry-level machines. Although the H270 and B250 platform controller hubs offer more connectivity than their predecessors due to increased HSIO lane allocations, if you don't need those features, low-cost 100-series motherboards are plenty attractive (and less expensive).

Some games benefit more from high clock rates more than any other specification, and most titles played on a mainstream gaming system will be graphics-bound before a CPU bottleneck rears its ugly head. Either one of the Pentiums we're reviewing complement low-cost motherboards and sub-$200 graphics cards for reasonable 1080p performance. But at the price points we're talking about, we want to really optimize for value. Let's see if the G4620's slightly higher clock rate is worth the big premium.