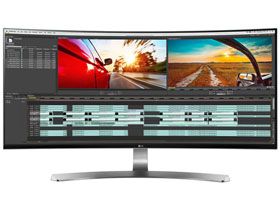 Curved monitors require a little extra carton depth to protect their delicate screens. LG has surrounded the 34UC98 with dense foam while keeping the box to a more manageable size. Further efficiency comes from packaging the upright and base separately; you'll have to assemble them yourself. The base screws on with two captive bolts and the upright snaps onto the panel for a secure fit.

Included in the box are white accessories to match the monitor's trim color. The power supply is an external brick. Video connectivity is supported by heavy-duty HDMI and DisplayPort cables. FreeSync is supported only over the latter interface. You also get a printed quick start guide along with a CD that contains a user manual and desktop control software.

The base has a metal core covered by high-quality silver plastic. It looks slender in photos but it's actually quite solid and holds the panel in place with no play whatsoever. The upright is covered in bright white plastic that has a nice soft feel to it. Styling is simple and clean. The 34UC98 will be equally at home on PC or Mac desktops. When there is no picture, the panel appears to be border-free but there is a thin .4-inch frame around the image when the power is on.

The anti-glare coating is a 3H hardness layer that keeps all but the harshest reflections from affecting the clear and sharp image. Controls are all integrated into a single tiny joystick found under the LG logo at the bezel's center. It moves in four directions and can be clicked. Menus appear on the screen telling you how to navigate the OSD. It's very intuitive and much like what we've seen on previous LG products. We prefer this arrangement over buttons. The stick is surrounded by a soft-glowing white LED that casts a little light on your desktop for a nice effect. You can turn this feature off if you wish.

Curved monitors won't win any awards for slimness but LG gives that impression by packing most of the guts into a bulge on the panel's lower half. The excellent stand is adjustable for height and tilt but not swivel. A small cable clip attaches to the upright to keep your desk tidy.

The 34UC98 curves smoothly across its back but leaves a flat area in the middle to attach the stand. Underneath the plate is a 100mm VESA mount and the bolts are included, which is a nice touch. With an external power brick, there isn't much inside the chassis to generate heat so the vents are hidden on the bottom. They also serve as grills for the better-than-average seven-watt speakers. Sound quality is further enhanced by tuning from MaxxAudio.

Inputs face rearward and there are quite a few choices here. You get two HDMI 2.0 ports, which is nice to see. Many new monitors still ship with version 1.4. The single DisplayPort is 1.2 and the only way to use FreeSync with the 34UC98. Mac users will find uses for the two Thunderbolt 2.0 ports, which offer speeds up to four times that of USB 3.0. For PCs there are two USB 3.0 downstream ports, one of which includes quick charge functionality. Finally, there is a single headphone output just above the DC input.