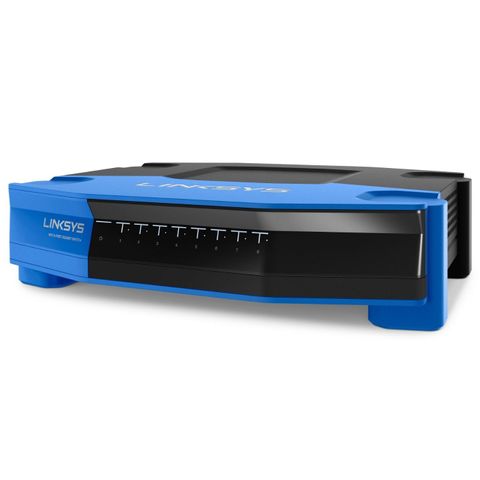 The Linksys SE4008 WRT posted benchmark results comparable to those of other offerings, so performance most likely will not be a factor in choosing this switch over others. Build quality was high, even though the case was made of plastic. However, this switch, along with a compatible router, creates an ecosystem that is subjectively aesthetically pleasing, which cannot be said for many other offerings, such as the Netgear GS308 or the Amped Wireless G8SW. Currently, the SE4008 is widely available, so you should have no problem obtaining the switch.

It's probably safe to say that wireless connectivity is more ubiquitous than wired connections in the home. Even still, there's a void that a simple network switch can fill. Such a device facilitates range that doesn't wane across the house and provides consistent performance, regardless of who's using the microwave. Those factors are important if you need a steady connection for streaming high-quality audio and video, or transferring large files.

Today, we're reviewing the Linksys SE4008 WRT Gigabit Switch, an interesting-looking networking device with styling reminiscent of Linksys' family of WRT routers, both in color and shape. Specifically, this switch was conceptualized as a stacking pair with the WRT1900AC router, but is also stackable with the WRT1900ACS and WRT1200AC devices. If the switch is installed along with a compatible router, Linksys emphasizes that it should be placed underneath to allow heat to escape from the sides and bottom.

Linksys is now owned by Belkin, but it still provides a range of switches that are appropriate for the home. Its SE4008 WRT falls around the middle of the price spectrum compared to stablemates like the SE1500 and SE3024. However, as mentioned, the SE4008 WRT is special due to its aesthetics and its ability to pair with compatible routers, even though it commands a premium price over the similar SE2800 eight-port switch.

The SE4008 WRT's specifications include a 128KB memory buffer, an 8000-entry MAC address table, an MTBF of approximately 853,300 hours and status LEDs for connectivity/activity (there's a switch on the back to turn them off). The unit utilizes the typical store-and-forward method of passing data along.

The SE4008 WRT is compliant with 802.3az Energy-Efficient Ethernet and 802.3x flow control. It also supports network standards like 802.3 10BASE-T, 802.3u 100BASE-T and 802.3ab 1000BASE-T, with all ports auto-sensing and able to adjust to the fastest speed supported on the connecting device, up to gigabit link rates. Even though the SE4008 WRT does not use much power, it can turn off unused ports or those in which the plugged-in client is powered down.

Lastly, the SE4008 WRT includes a quality-of-service feature (IEEE 802.1p) that automatically prioritizes network traffic for video and audio applications, which may help smooth out streaming. The 802.1p standard operates at the data-link layer by setting a three-bit value in the MAC header to indicate prioritization level. There are multiple levels of prioritization, ranging from 0 up to 7. If network congestion occurs, packets that have been assigned higher priorities receive preferential treatment.

The SE4008's bundle is fairly limited. Rubber grip pads are already installed on the switch's feet. You also get a power adapter, a documentation CD and the switch itself. Unlike most other switches that can be wall-mounted, the SE4008 does not come with anchors or screws. However, because this switch will most likely be stacked with a compatible router, this omission is not egregious.

The SE4008 is available online from vendors like Newegg, Amazon and TigerDirect. Its MSRP is $80, however, current prices range from $51 to $70. That's quite a bit of cash compared to competing switches with similar features. You'll have to decide if the expense is worth the fairly niche convenience of stacking another Linksys device, and if you're really attached to that nostalgic appearance. The SE4008 comes with a one-year warranty.