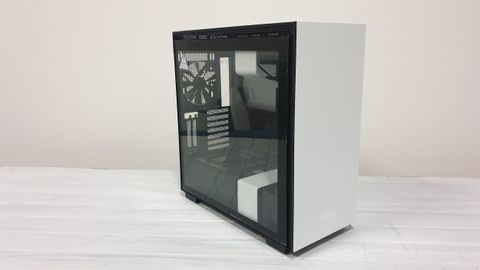 Now that our AIO build is out of the way, it’s time to get down to the thermal performance testing. For this, we perform two rounds of tests.

The first set of benchmarks takes advantage of an air tower (notably Noctua’s NH-U12A), equipped with 2x Corsair ML120 Pros. This allows us to keep the included case fans that come as standard with the NZXT H700i in their factory installed locations during testing, without running into compatibility issues, and is an ideal insight for those looking to just plug and play their kit into the case.

The second set of benchmarks, utilize what we consider to be the most optimal installation setup when it comes to both the included chassis fans, and a 240mm AIO liquid-cooler. The cooler again featuring those same 2x Corsair ML 120 Pros. This way we can showcase just what each chassis is capable of in a “best-case” scenario, without necessarily investing in additional fans, just purely by moving the ones provided around inside with the help of an AIO.

In stock configuration the H710i actually performs far better than we expected, especially for a chassis that has such thick front and roof panels. As standard the three intake fans in the front of the case, are a bit, well, basic.

That aside, even with Noctua’s NH-U12A, NZXT’s H710i chassis is a fantastically well balanced case, and this is nowhere better reflected than within the temperature results. The CPU registered a svelte 71 C and the GPU topped out at 73 C, after 1 hour of intensive load. It just goes to show that despite that massively hefty front panel, seemingly stifling available air, the H710i can easily keep up with the more airflow oriented designs in our benchmarks so far.

As we move over to our Optimal test setup, featuring a 240mm AIO acting as a top mounted exhaust, this is where we begin to see the limitations of those front fans and the solid roof panel stifling exhausting airflow. With both the CPU and the GPU sat at 69 celsius in contrast to our other two test cases, there’s clearly a tangible difference when mounting the AIO in this configuration.

Compared to the stock airflow setup however, you still gain a net savings of six degrees overall by taking advantage of that 240mm AIO as an exhaust, with the GPU benefitting most dramatically out of the two components. We’d love to see a variant of the NZXT H710i with perhaps a mesh panel cut out of the top, to allow for better exhaust there. As with sufficient static pressure oriented fans situated in the front, we have little concern that this case couldn’t draw in enough cool air, but pushing that hot air out of the top of the case is clearly far more difficult, and may explain why NZXT favored not including a top mounted dust filter.

Ultimately, the H710i is a pleasure to build in, looks great, and compared to its predecessor the H700i, packs in some nifty little features that really separate it out from the rest of the premium ATX tower pack and land it at place, at publication time, on our list of best pc cases.

It’s not perfect, but for a mid-tower chassis at this price point, it exudes that premium feel throughout, and performs just as well. Going forward, we’d love to see the next step in this evolution feature a variant of the case with that mesh cutout in the top panel we mentioned earlier, and perhaps one lacking the fan controller and integrated LED strips to bring the price down. The true value of this case lies in the build experience, the internal layout, and its cooling performance, if it hit that $150 sweet spot, the H710i would be an absolute no-brainer for any PC enthusiast looking for a quality case and a solid price.