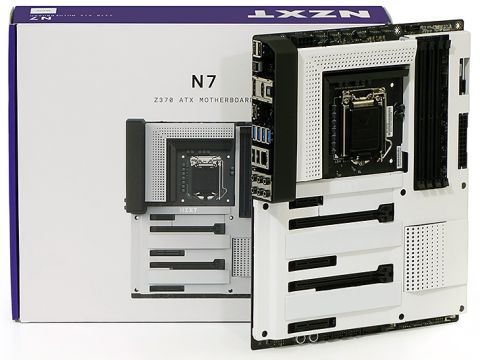 NZXT’s N7-Z37XT is an amazingly solid premiere motherboard product. It reflects the pricey nature of low-volume sales, but offers buyers willing to pay that price an unusual look, NZXT’s famed fan and RGB controls, and the confidence of knowing that every onboard interface can function simultaneously.

It’s not every year that we see a new motherboard brand. Heck, it’s not even every 10 years. In the world of enthusiast-level PCs, certain things are relatively easy, while others present larger challenges. Slapping a label on an Asetek-made CLC? Relatively easy. Hiring a designer to work with an established production facility to make a variation of an existing case that looks slightly different than everything else? Not too difficult. Getting that facility to produce an entirely new case design that may involve new tooling? Slightly challenging.

But producing an entirely new motherboard from a clean sheet? Only the most experienced motherboard brands would do that. Until now?

Labeled as having been designed in California and manufactured in China, the N7-Z37XT is NZXT’s first foray into the motherboard market. We aren’t given details about how much control the ODM was given concerning its circuit design, although it’s likely that NZXT was at least responsible for specifying which connectors to use and where to put them.

Designed to support NZXT’s Grid+ (fan) and Hue+ (lighting) controls, the N7-Z37XT is available with either -W1 white or -B1 black shrouds.

Conspicuously absent from the N7-Z37XT spec sheet are any USB 3.1 Gen2 controllers, in an enthusiast market where nearly every traditional brand has recently upgraded to the latest PCIe 3.0 x2 version. Some boards in its price class even have two of those, the second dedicated to a recently-introduced front-panel header. We’ve only tested one case with the newer Gen2 connector, but it will be interesting to see if NZXT introduces one that isn’t supported by this board.

Boards in the N7-Z37XT’s price class typically have dual gigabit Ethernet as well, and the absence of that extra feature leaves a noticeable gap in the I/O panel. On the other hand, a few absent features have allowed NZXT to avoid resource sharing, which is something its competitors aren’t even attempting to do. All of the N7-Z37XT’s features can be used simultaneously.

While it’s possible to configure up to four NVMe drives using a combination of four-lane M.2 and four-lane PCIe x4 slots, the chipset’s link to the CPU is still limited to Intel’s four-lane DMI. And while there isn’t any HSIO sharing that would disable slots or devices, the CPU’s separate x16-lane PCIe controller still serves the two x16-length slots in either x16/x0 or x8/x8 modes, using automatic detection of a second card to make that transition. There are no magic tricks or latency-inducing hubs; just a design that’s well-planned to make full use of available resources.

Removing two plastic covers exposes the two M.2 slots and a Port 80 diagnostics code display. A third plastic piece of similar style covers nothing of import, and was likely added to match the style of the M.2 covers.The primary USB 3.0 connector and four SATA ports can also be seen from this angle.

The bottom edge has a front panel HD-Audio header, power and reset buttons, three USB 2.0 headers, a second USB 3.0 header, four fan headers, an AC-97-style front-panel button and LED group, a BIOS IC selector switch, and a button that, when deployed, copies the active firmware ROM over the inactive ROM.

While the black plastic I/O hood is screwed on, the painted steel motherboard shroud is secured with metal snaps. Underneath these are a traditional-looking upper-range board with matte-black mask.

The original N7-Z37XT installation kit includes four SATA cables, two magnetic/adhesive RGB lighting strips, two RGB adapter cables, two RGB extension cables, a single-link SLI bridge, an I/O shield, and a nondescript set of threaded hardware. NZXT is revising the contents of its next motherboard shipment to remove the RGB strips and cables, and has reduced its MSRP by $50 to match this hardware reduction. A few buyers will likely "luck out" by receiving the original kit at the new, lower price.

Next Page Software & Firmware
33 Comments Comment from the forums