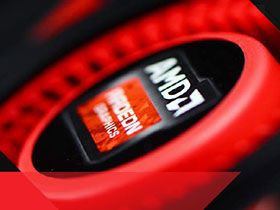 Particularly after the excitement of Radeon R9 290X, 290, and GeForce GTX 780 Ti, it's hard to get excited about re-branded products from previous-gen GPUs. Yet, from time to time, both AMD and Nvidia have been guilty of the recycling old processors and giving them new names. The worst cases of this are when a card with the same exact specifications, shader count, clock rates, and all, gets repackaged, adding confusion to the marketplace. Not everyone jumps online to read graphics card reviews, leaving a lot of people vulnerable to an "upgrade" they didn't need.

Re-branding is a little easier to accept if it's accompanied by performance increases along the price band. Nvidia did this with its GeForce GTX 770, upping speed and dropping cost. AMD's Radeon R9 280X similarly improved performance versus the Radeon HD 7970 and made Tahiti more affordable at the same time.

Today, AMD introduces another re-branded graphics card: the Radeon R9 270. Apparently, the company felt it wasn't enough to rename the product itself; it also started using Curacao to refer to the GPU we know as Pitcairn. We're not sure why. It's still calling the R9 280X's processor Tahiti, after all. But here's Curacao/Pitcairn again, in all of its glory:

More than a year and a half ago we introduced you to this GPU's specifications in AMD Radeon HD 7870 And 7850 Review: Pitcairn Gets Benchmarked:

"Pitcairn hosts 20 compute units, each with four vector units made up of 16 stream processors and a single texture unit. In an uncut GPU, those numbers multiply out to 1280 total shaders and 80 texture units. AMD shears off four compute units from Pitcairn to create the Radeon HD 7850, resulting in 1024 shaders and 64 texture units.The GPU’s back-end is made up of eight render partitions, each with four full-color ROPs, totaling 32 ROPs. Four 64-bit memory controllers yield an aggregate 256-bit memory bus."

So if the Radeon R9 270X replaced the Radeon HD 7870, then we should expect its R9 270 to displace the cut-down Radeon HD 7850, right? But the comparison gets interesting when we look at the specs, clock rates, and prices of AMD's current line-up.

First, let's consider those clock rates. The slower core frequency and faster RAM seems designed to deliver performance on par with the old Radeon HD 7870. This doesn't really make sense, though. Why down-clock Pitcairn and spend more on pricier GDDR5? The only hypothesis I have is that AMD wanted the 7870's performance, while ducking under the limit of one six-pin auxiliary power connector. As you can see, the Radeon R9 270 has a 150 W TDP compared to the Radeon HD 7870's 175 W ceiling. Both the Radeon R9 270X and HD 7870 require two of those connectors.

As for the $180 price tag, that's $20 cheaper than the recently-released Radeon R9 270X, a card with the same 1400 MHz memory clock, but a 125 MHz-higher core frequency (1050 MHz). Assuming boards really sell for $180 at launch, the Radeon R9 270 will end up $10 below the street price of a GeForce GTX 660, its main competitor from Nvidia. That also pushes the 270 below the average price of Radeon HD 7870, an offering we've seen heavily discounted over the past few months. This was only temporary as retailers sought to clear out inventory. We already know from AMD that the Radeon HD 7870 and 7850 are expected to disappear soon.

It's also worth noting that leveraging the Pitcairn/Curacao processor means the Radeon R9 270 and 270X do not support AMD's new TrueAudio feature. You'd need a Radeon R7 260 or Radeon R9 290 series card for that. AMD's Mantle API is supported, as it is with all GCN-based parts, but it remains to be seen how successful that will be.

Update: It was recently brought to our attention that AMD represented its Battlefield 4 promotion inaccurately; it relies on both the participating retailer and add-in board partners to choose the models that include a game voucher. In addition, there is a limit of 1000 of these vouchers available. A Newegg search for "Radeon Battlefield 4" results in five hits (one Radeon R9 290 and four R9 290Xs).

So the big question now is: how does the Radeon R9 270 perform compared to AMD's Radeon HD 7870? And is the newer board a good value compared to the GeForce GTX 660? We have a lot of benchmarks on the way to help answer that question. First, let's have a look at our test sample.

Sapphire's Dual-X R9 270 features a mild factory overclock, its core operating at 945 MHz (up from 925 MHz) and GDDR5 memory at the reference 1400 MHz frequency. Our Radeon R9 270 benchmarks are run at AMD's reference clock rates, though.

Sapphire's Radeon R9 270 has two dual-link DVI connectors, HDMI, and DisplayPort outputs. Because this board's power ceiling is 150 W, it only has one six-pin auxiliary power input. AMD dictates that the R9 270 only feature one CrossFire connector, limiting you to dual-card configurations.