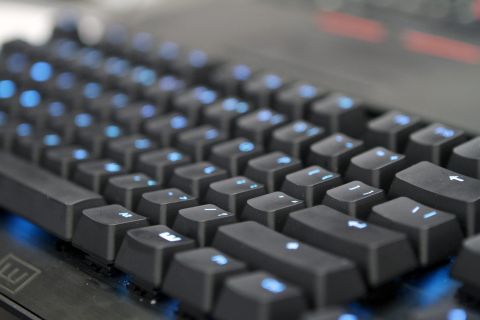 All three of the analog profiles in Wootility are eminently configurable. One of them is set for flying games by default. The other two just have the WASD keys preset as the left analog stick controls. Each of the three profiles is set to a different color by default. (As with the Digital Profile, you can quickly and easily change the lighting scheme.)

The “Gamepad keybindings” and “General keyboard settings” are where you’ll work the analog magic.

You’ll note that the former has two columns. The left column shows all the buttons, sticks, and triggers of an Xbox controller. The right column shows which keys are bound to those controls. When you’re in an analog profile and fire up a game, the game thinks the keyboard is a gamepad, and thus these bindings are your controls. Some of the bindings are preset (eg, the WASD keys bound to the left analog stick’s directional functions), whereas others are blank (represented by a “0”).

To assign a key to one of those gamepad controls, simply click the empty slot and press the key. Click “Save to keyboard” in the lower right corner, and Bob’s your uncle.

The “General keyboard settings” area of the analog profiles is the same as on the Digital Profile. However, note that changing the actuation point here actually does nothing; the feature is only for the Digital Profile. Wooting likely just left it like that because it was easier to copy over the same code. The final version of Wootility might handle that differently. When you configure the analog curves, you’ll effectively be adjusting the actuation point anyway, though.

Below that is the “Advanced gamepad settings,” which is where you can set your analog curve, and where the real fun begins.

Remember, every key on the One is capable of analog input. When you change the analog settings here, you change them for all of the keys.

First, you’ll see the “Enable digital keys” toggle. Wooting built this in as a “just in case” sort of a feature. In its materials, Wooting said, “In this mode you can still use it as a regular keyboard but some games don’t play nice with keyboard + gamepad input at the same time. You can choose if you still want the normal keyboard enabled in the Analog mode.”

Below that is the “Anti-Deadzone” slider. A “deadzone” is a way to prevent users from accidentally engaging movement (or what have you) in an analog controller, such the joystick on an Xbox controller. There are “steps” within any analog control’s range; the more steps there are, the smoother and more refined the control can be.

So, simply put, if a given controller has 100 steps, the manufacturer could set the joystick’s deadzone such that it won’t actuate until step 25. With the Wooting One, there’s already a hardware deadzone (described above), so Wooting figured that employing an actual deadzone on the One made no sense. However, some games have their own deadzone built if for Xbox controllers, to the “Anti-Deadzone” slider is a way for you to get rid of that. Wooting noted that, for example, you can completely remove the in-game deadzone in Rocket League.

Next is the “Sensitivity start” and “Sensitivity end” sliders. Using these, you can shape your analog curve--that is, how the analog input plays out under your fingers. You can adjust either end of the sensitivity by clicking and dragging the sliders, and you’ll see that the line in the graph below will change its shape commensurately. For now, ignore the numbers and focus on the line on the graph; the numbers, at this point in Wootility’s life, are not particularly instructive.

You can go a little nuts with these sliders.

Short of endlessly fiddling with the sliders, you can also select from one of three preset curves. If you click “Analog Curve Template,” you’ll get a drop-down menu that lists “Linear curve,” “Aggressive start curve,” and “Slow start.” Each one will give you its own preset analog curve.

You can then use the sliders to further adjust any of the template curves that you choose.

This should be the point in the article where we’d offer suggestions on curves that work best in certain types of games and explain why. Afters hours of experimenting, though, we’re not going to bother; the whole thing is far too subjective.

And that’s a good thing--a very, very good thing. What we found is that from genre to genre, game to game, and even character to character, we would tinker and tweak to find just the right fit. Take a title like Overwatch and its cavalcade of characters to choose from. You may find that you want X analog curve for a speedy character and a Y analog curve for one of the bigger, slower ones. Or perhaps Z curve is ideal because of one character’s particular primary weapon.

Then, perhaps you switch to Star Wars: Battlefront, where you’ll want separate profiles for when you’re running, driving, or flying. Then Team Fortress 2, for which you may want to slightly adjust the settings for those characters. Then Rocket League, for which you’ll want a special driving profile. Then--well, you get the idea. It’s a rabbit hole.

For what it’s worth, after hours of gameplay and much tweaking of the settings, I personally found that I preferred this analog curve for FPS titles:

It gives me sensitivity early in the keypress, so I can start creeping slowly with a gentle press. I feel like I still have a lot of control over my speed in the middle of the press, and then when I panic (I always panic) in the middle of a firefight and mash the key down, I’m at an all-out sprint.

Suffice it to say that the “ideal” analog curve is completely subjective. But that’s the whole point--the One’s analog capabilities give you more control over your movement, and you can customize it quite granularly.

Prev Page Software: The Digital Profile Next Page The Analog Gaming Experience
25 Comments Comment from the forums
Be In the Know