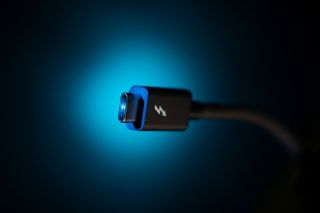 There are plenty of AMD motherboards out there with Thunderbolt 3, but none of them have been certified by Intel until today. Today will go down as a special day in ASRock history, because now it's able to say that it's the first to have an Intel-certified Thunderbolt AMD board.

The motherboard in question is the X570 Phantom Gaming ITX/TB3, which is a small-form-factor Mini-ITX motherboard based on AMD's latest enthusiast X570 chipset. In our ASRock X570 Phantom Gaming-ITX/TB3 review in August, we gave the mobo our Editor's Choice award, meaning it was already a great motherboard. Now, it just has a new certification to boast about.

What makes this worth celebrating is that it took three generations of AMD Ryzen for Thunderbolt to finally reach AMD boards, and it took the better part of a year for one of those products to earn Intel certification.

In the past, Intel didn't allow vendors to produce Thunderbolt-compatible silicon. But in an effort to boost adoption, Intel abolished this practice in 2019 and handed the Thunderbolt 3 specifications over to the USB Implementers Forum (USB-IF). However, getting Intel certification still requires a one-time fee, the details of which remain undisclosed. It's unclear whether Thunderbolt certification will continue to be a thing after USB 4 is standardized in the market.

Thunderbolt was a proprietary Intel technology, and though it operates over a USB Type-C port, it is capable of far more than just carrying a USB signal. It can also handle power delivery, DisplayPort and PCIe. Thunderbolt 3, therefore, can carry a bandwidth of up to 40 Gbps, which is twice that of USB 3.2 and four times as fast as USB 3.1 connections. Since USB 4 uses the Thunderbolt 3 protocol, it basically is Thunderbolt 3, so USB 4 will be able to reach that speed too once it's implemented in devices.

Thunderbolt's biggest party trick is its ability to daisy-chain, with Thunderbolt 3 specifically able to chain up to six devices together. Paired with this ability comes the benefit of one-cable docking, which is why we've seen more and more monitors embed USB hubs and Ethernet, connecting to a laptop over a single cable and skipping the need for a power cable altogether.

With this much information and power being transferred over a single cable, it's helpful to know that ASRock's motherboard will work up to the standard that Intel expects it to.

17 Comments Comment from the forums
Be In the Know