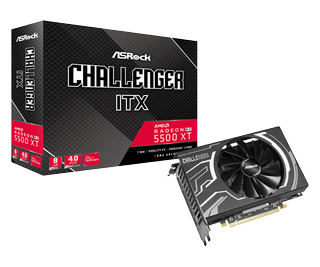 ASRock is going after the hearts of small form factor (SFF) PC builders with its latest graphics card. The ASRock Radeon RX 5500 XT Challenger ITX announced today aims to be one of the best graphics cards for tiny computers. Don't let it's size fool you; it's strong.

One would almost be forgiven for mixing this card up for a gremlin on steroids. But although it's small, it's also aggressively styled and comes with excellent clock speeds. Almost all top-of-the-line RX 5500 XT cards come with a boost clock of up to 1,845 MHz, which ASRock's RX 5500 XT Challenger ITX matches.

The cooler on the unit is nothing too fancy but does come with a few copper heatpipes and a supposed "long-life" fan.

The one thing that does concern us slightly is the card's width. It's only 190mm long, but it's 139mm wide and stretches beyond the slot width, which might make for a troublesome fit in some PC cases. The good news here is that the PCIe power connector is on the back of the card, so it's not adding to the width.

ASRock didn't share any word on pricing yet, but we expect this card to be among the more affordable units due to its simplistic design.