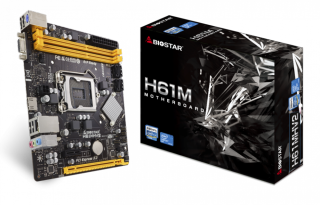 It seems like someone at Biostar woke up morning thinking 'Hardware was better in 2011. We should make a new motherboard with 2011 tech on it." We say that because Biostar is launching a reboot of the H61-series chipsets with its new H61MHV2 board.

The H61MHV2 is a Micro-ATX board, according to Biostar, but looks more like a Mini-ITX format with one extra expansion slot. We suspect it'll fit in Mini-ITX PC cases with two or three expansion slots too. At its center is an LGA1155 CPU socket that supports up to Intel Core i7-3770K CPUs, which can be paired with up to 16GB of DDR3 RAM running no faster than 1,600 MHz.

The layout gets even weirder though. The memory slots are at the top, the CPU socket is rotated 90 degrees and the chipset 45 degrees. Totally different from modern layouts, the 24-pin ATX connector resides at the top right corner above the memory slots, and the 4-pin EPS connector is awkwardly placed all the way past the CPU between the socket and the rear I/O.

Of course, there are no modern amenities, like such as USB 3.0 or USB Type-C, M.2 slots or PCIe 4.0. Even the SATA ports are of the old SATA II type with only 3 Gbps bandwidth, and PCIe 3.0 is only available when using Ivy Bridge CPUs.

As crazy as this might sound though, it really isn't. Older motherboards tend to go bad around this age while many of the system's other components may still be working. In fact, there's still quite a number of people using a 2nd or 3rd Generation Intel Core processor.

The second-hand market also reflects this: if you're looking for a replacement motherboard for this older platform, chances are you've experienced quite the sticker shock, even for used boards.

Of course, that doesn't mean much if we don't know how much Biostar's "new" H61 motherboard will cost. But it could be a good pick for breathing new life into an old PC for non-demanding workloads.