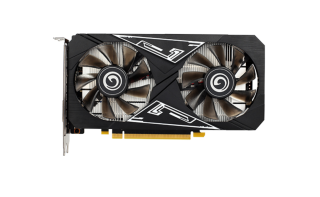 A new listing on Chinese GPU vendor SZGalaxy’s website hints at a potential upcoming entrant in the race for the best graphics card for your rig. As spotted by a Twitter user, the GeForce GTX 1650 Ultra suggest Nvidia has a new GTX-series GPU in the works.

Manufactured by Galax, the 1650 Ultra seems to be using an existing die with 896 CUDA cores and 6GB of 128 bit GDDR6 VRAM running at 12 Gbps, with a 1,590 MHz boost clock GPU. Galax’s specific unit also lists one DVI connection (hello, old school), one HDMI connection, and one DisplayPort connection.

There’s a bit of a snag in the listing, though. While the store page itself calls the new GPU the GTX 1650 Ultra, the specifications call it the GTX 1660 Ultra. However, given that all specs besides memory speed are lower than even the base Nvidia GeForce GTX 1660, we’re willing to bet that the discrepancy is just a typo. Still, that puts the 1650 Ultra in an awkward position.

The biggest difference between the GTX 1650 Ultra and the GDDR6 refresh of the base GTX 1650 is that it has slightly more VRAM. The Nvidia GeForce GTX 1650 Super, meanwhile, has 1,280 CUDA cores and runs at a boost clock of 1,725 MHz.

The 1650 Ultra supposedly uses the same TU106 chip that’s in the Nvidia GeForce RTX 2060 and RTX 2070, this time with a new, cut-down TU106-125 SKU. It's likely the GTX 1650 Ultra is Nvidia’s attempt to salvage as many chips as possible, so this would be a large chip but with the ray tracing and tensor cores disabled, sold at a more approachable price point. Still, performance is going to be a wild card.

Personally, I tend to associate “ultra” with being higher performance than “super,” but that doesn’t seem to be the case here. The GPU core will perform about the same as the base GTX 1650 / GTX 1650 GDDR6, but with 50% more memory and higher memory bandwidth. That may help it in a few edge cases, but overall the lack of GPU cores is going to limit performance.

If you’re interested in buying a new graphics card, want a minor upgrade over the GTX 1650 and don’t mind confusing adjectives, this looks like one to watch. We don't know pricing, but it's difficult to imagine this selling for more than the existing GTX 1650 Super. Then again, stranger things have happened.