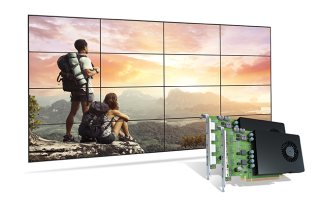 Just last week we reported that Matrox would collaborate with Nvidia to build new graphics cards for powering video walls, but at the time we didn't know many details. As it turns out, the full announcement was only a week later, and now the company has announced its D-series graphics cards powered by Nvidia Quadro GPUs.

The main selling point of these graphics cards is that each unit can drive four 4K displays, and when you whip four of the D-Series GPUs into a system you'll be able to drive up to sixteen 4K displays at 60 FPS. However, the DisplayPort variant can push a few more pixels at 5K per display.

Matrox also noted that you can opt to use its QuadHead2Go, adapters, and though you'll need sixteen of them for the full figure, it means you'll be able to split the sixteen outputs to 64 outputs to drive 64 Full HD displays instead of sixteen 4K units.

The graphics cards slot into a PCI-Express 3.0 x16 slot, and have a very minimal power consumption of just 47 W. That way, they're able to get away with a thin single-slot cooler. Memory is provided by 4 GB of GDDR5 DRAM, though no information has been provided about the GPUs core count or clock speeds. Either way, at this power envelope it's safe to say that all you'll be doing with these cards is playing videos.

Availability of the D-Series video-wall graphics cards to Matrox' enterprise customers is slated for early Q2 2020.