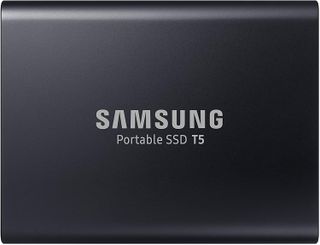 One of Samsung’s largest portable SSDs, the 2TB T5, is now on sale for $299.99 at B&H Photo and Video. That’s $100 off its typical $399.99 asking price, and since all of Samsung’s other portable SSDs also top out at 2TB, and a great way to get a lot of external storage at a discount.

In our Samsung T5 review from when the drive first released in August of 2017, we praised it for its design and dual support for both USB 3.1 Gen 2 and USB Type-C. Unfortunately, its $800 price at the time prevented it from being the best portable SSD for most and was too high for the performance offered. But now you can get its 500-plus MBps (according to our testing) read and write speeds for a fraction of the cost.

The Samsung 2TB T5 is 3.0 x 2.3 x 0.4 inches when measured LxWxH and weighs 1.8 ounces. Because it’s external, though, it should work for most systems. This deal is the latest in a general trend of cheaper SSDs we’ve seen over the past few weeks, and follows another recent Samsung sale, though that was on an internal drive.

With the latest savings spotted, the T5 now represents one of the least expensive available drives that Samsung still makes.