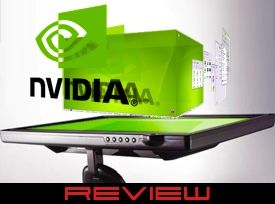 When you read a review of AMD’s latest graphics card or Intel’s latest CPU, there’s a fair chance you want to know, first and foremost, how that product performs. At least, that’s why we run the most exhaustive battery of tests possible. You take those performance figures and  factor in pricing, availability, and the competition to arrive at a decision: is this worth my money or not?

Other products are evaluated far more subjectively, though. Mice, keyboards, remotes—for many of those devices, you consider look, feel, interface, and setup. It’s much more difficult to lay down a decisive judgment on an item that might just feel better in your hand than it does in mine. Hence, the challenge in reviewing Nvidia’s new GeForce 3D Vision glasses, which incite very personal opinions, depending on who wears them.

Nvidia Goes Back To The Future

If you’ve been around long enough, then you probably remember Elsa’s 3D Revelator glasses circa 1999. The shades came bundled with Elsa’s Erazor cards, worked with DirectX games, and required a minimum 100 Hz refresh rate. Naturally, that meant you were using a CRT display. Once the world started shifting to LCDs running 60 Hz, the active technology Elsa used simply wouldn’t work—the refresh rate in each eye was too low for flicker-free game play.

Besides, while the 3D glasses were cool in concept—and indeed looked impressive in a number of games—there were some downsides. First of all, the Nvidia TNT2 cards of the day took serious performance hits when they were used for stereo viewing. Back then, 800x600 was about all you could ask for. There were also a handful of driver settings that needed to be configured, depending on the game you were playing. Finally, eyestrain became a problem over time. We’re so used to playing 3D games on a 2D panel, that adding depth takes some getting used to. Nevertheless, because the Revelators were part of a hardware bundle, it didn’t hurt to try them out.

Now, LCD panel technology has come far enough along that the idea of active stereoscopic glasses is once again viable, and Nvidia is out to show that a lot can happen in 10 years. Its GeForce 3D Vision glasses were first showcased at NVISION in the fall of 2008. And they're now ready for retail (the company can’t yet say which brick and mortar will carry them, but we’re going to go out on a limb and guess Best Buy will have them on offer).

Having played with Nvidia’s new shades for the past several days, it’s safe to say that they’ll fundamentally change the way you experience 3D. However, we’re not quite ready to call the technology bullet-proof. Onward for more about what you’ll need in order to run a set of 3D Visions and what you can expect to see with the setup purring.