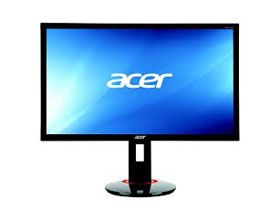 Today's comparison group is a mix of G-Sync, FreeSync, IPS and TN panels. G-Sync screens include the Asus PG278Q and our review subject, Acer XB270HU. FreeSync is represented by the Acer XG270HU and BenQ XL2730Z. Rounding out the group is Monoprice's 120Hz IPS display and the Overlord Tempest X270OC.

The XB270HU puts out plenty of light and exceeds the manufacturer's claim by 10.6577cd/m2. That's a good thing because as you can see, there's a significant drop in brightness when ULMB is engaged. Acer chose not to include a variable pulse-width adjustment and it's sorely needed. Other screens we've tested can significantly reduce blur and maintain a longer pulse, resulting in more light.

If you can game at the lower light level created by ULMB, you'll be rewarded with a fantastic black level; .0979cd/m2 is barely visible unless the room is in total darkness.

Some monitors' blur-reduction feature reduces overall contrast but not the XB270HU. While the output reduction is large, contrast stays pretty much the same. The main bummer is you can't use G-Sync or 144Hz and ULMB at the same time. The upside is this Acer posts one of the best contrast results of any gaming monitor we've tested.

This monitor has one of the widest-ranging backlight controls we've ever seen. At 5.7802cd/m2 you can't see much on the screen. It does make for a great black level measurement though.

.0057cd/m2 is the lowest black level we've ever measured on any monitor or television including our reference Pioneer Kuro plasma HDTV. Of course you'll be experiencing some eyestrain since there is so little peak output.

Contrast stays consistent throughout the backlight's adjustment range and the XB270HU retains its first-place contrast ranking. Please refer to our settings on the previous page if you want 50, 80, 100, 120 or 200cd/m2 for your peak white level.

The calibrated black level is very low thanks to well-designed RGB sliders and excellent gamma tracking, which we'll talk about on the next page. Blacks like these result in an image with superb depth and contrast.

Even after reducing the Contrast control two clicks, the XB270HU retains the top spot in our on/off contrast tests. To see this along with very accurate grayscale and gamma means this is one of the best-looking gaming monitors we've used to date.

ANSI contrast is a little lower because of hotspots in the upper-left and lower-right corners of the screen. The hotspots aren't visible in the black field test, but the higher readings hurt overall intra-image contrast measurements just a little. This is still an excellent result though; we're very impressed with the quality of Acer's panel.